Trump: Lebanon Is Fighting A Group That Has Seats In Its Government 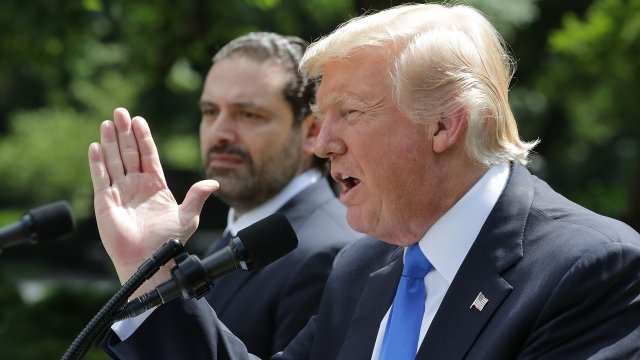 Hezbollah is helping to fight ISIS, but the group holds political sway in Lebanon. The two are not fighting, as the president seemed to suggest.

"Lebanon is on the front lines in the fight against ISIS, Al Qaeda, and Hezbollah," Trump said in the Rose Garden on Tuesday.

But there's just one problem: Hezbollah and Lebanon are allies.

It's not clear what the president meant or if he just made a mistake. Either way, here's a look at who's actually fighting whom:

Lebanon is fighting ISIS. The jihadists have spilled over into the country from neighboring Syria. Hezbollah is also fighting against ISIS, along with Syrian forces under President Bashar al-Assad. But Lebanese forces aren't fighting Hezbollah.

The United States considers Hezbollah a terrorist organization. But in Lebanon, it's part of the ruling government. The Shiite group is part of the parliamentary coalition in power.

On Friday, Hezbollah worked with Syrian forces to push Islamist radicals off the Lebanese border. The group's leader said it was "high time" to remove the extremists.