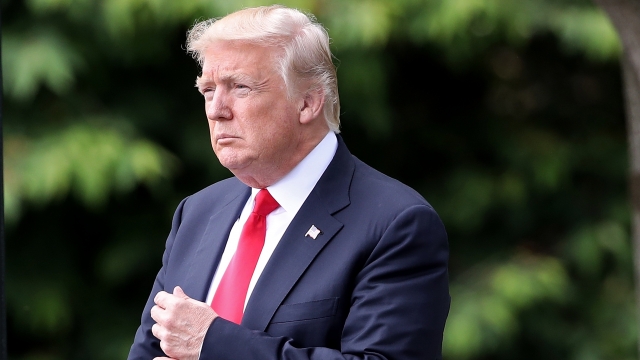 That was just one revelation Monday about the state of the federal government's technology  — which President Donald Trump wants to overhaul.

"Fifty years ago, our government drove the innovation that inspired the world and put Americans on the moon. Today, many of our agencies rely on painfully outdated technology," Trump said at an American Technology Council roundtable.

Trump created the council in May with an executive order. Its purpose is to help modernize the federal government's technology.

Last week, the policy theme was infrastructure. This week, it's workforce development.

Some of the tech companies in attendance were major critics of the president's travel ban limiting visitors from some Muslim-majority countries.

One person not in attendance was Tesla's Elon Musk. He stepped down from a number of White House advisory councils after a different controversial Trump decision — withdrawing the U.S. from the Paris climate agreement.

Although the White House invited Facebook to attend the council's meeting, the company did not send a representative. A Facebook spokesperson told Axios "scheduling conflicts" were to blame.