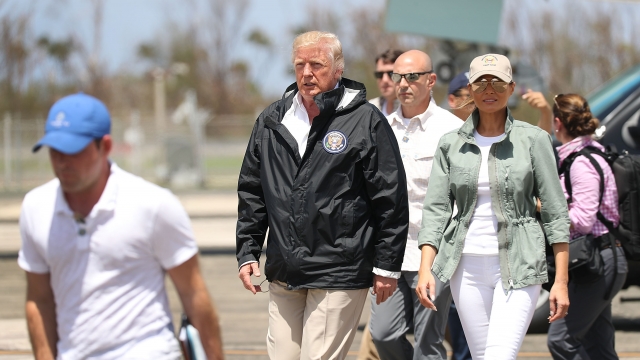 President Trump said Puerto Rico received $91 billion to recover from Hurricane Maria, but the real number is less than half of that.

After Congress rejected a bill to approve more disaster aid for Puerto Rico, President Trump appeared to express frustration with the aid the island's already received.

President Trump tweeted, "Puerto Rico got 91 Billion Dollars for the hurricane, more money than has ever been gotten for a hurricane before."

Those are hard numbers that we can check. And the president is wrong on both accounts.

To jog your memory, Hurricane Maria pummeled Puerto Rico in September 2017. It took almost 11 months to restore power across the island, and the latest death toll from the nearly Category 5 storm is around 3,000.

FEMA tracks active disaster relief spending online. As of Dec. 31, 2018, Congress had approved over $40.7 billion for Puerto Rico. But only about $11.2 billion has actually been spent.

A senior administration official told our partners at Politifact the president's $91 billion number included $50 billion in anticipated spending. So he didn't pull the number out of thin air. But it is inaccurate and misleading to lump hypothetical future spending in with congressionally approved spending.

The other half of the president's tweet said Puerto Rico received a record amount of money. But the numbers don't support that claim either. It's hard to compare the recovery costs for different storms since the circumstances vary, but let's look at Hurricane Katrina and Hurricane Maria.

Katrina devastated New Orleans in 2005, but the Gulf Coast region was also impacted by other systems like Hurricanes Wilma and Rita. Puerto Rico was in a similar situation in 2017. The island took a direct hit from Maria, but the damage was compounded by other hurricanes that passed close by, like Hurricane Irma.

Now let's look at the costs. In August 2007, the Congressional Budget Office said Congress had approved $94.8 billion for the Gulf Coast. Total spending for Katrina recovery has gone up since 2007, but that time frame makes for a good point of comparison to the current situation in Puerto Rico. Congressionally approved spending currently sits at about $40.7 billion. That's not anywhere near $94.8 billion earmarked for the 2005 hurricanes in the two years after those storms. That makes President Trump's "record" claim false before we even consider more-up-to-date Katrina recovery costs.