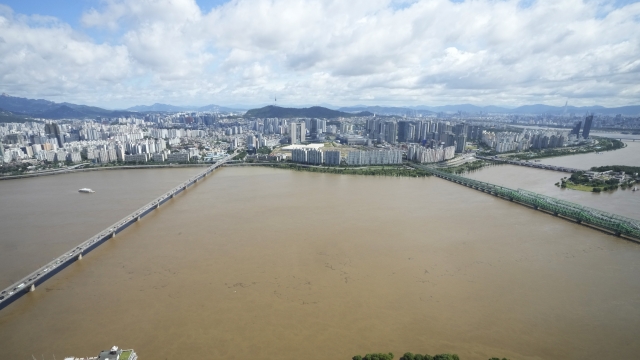 The most powerful typhoon to hit South Korea in years on Tuesday dumped 3 feet of rain, destroyed roads and felled power lines, but the death toll of three could have been higher if not for proactive evacuations and closures of schools, officials said.

There was also greater public awareness about the storm and its risks. Typhoon Hinnamnor made impact just weeks after heavy rains around the capital Seoul caused flooding that killed at least 14 people.

Government officials had put the nation on high alert for days as Hinnamnor approached, warning of potentially historic destruction and putting in motion life-saving measures.

After grazing the resort island of Jeju and hitting the mainland near the port city of Busan, Hinnamnor weakened as it blew into waters between the Korean Peninsula and Japan.

South Korea's weather agency said Hinnamnor was over the open sea 173 miles northeast of Ulleung island with winds weakened to 71 miles per hour on Tuesday afternoon. It was expected to be downgraded to a tropical cyclone by night as it moves northeast between Russia and the northern Japanese island of Hokkaido, the agency said.

However, the damage was still severe in the southern city of Pohang, where two people were found dead and at least seven others were missing after the storm submerged roads and buildings, triggered landslides and flooded a shopping mall.

Cars with smashed windows and trunks open lay scattered on roads like garbage. An entire two-story pool villa was uprooted from the ground and swept away in flash floods. Troops were deployed to assist with rescue and restoration efforts, moving in armored vehicles rolling through streets that turned into chocolate-colored rivers.

Firefighters navigated flooded neighborhoods in rubber boats, rescuing people and their pets. Merchants scrambled to salvage furniture and other belongings at the famous Guryongpo outdoor market, where workers deployed excavators to clear huge piles of debris.

The rain and flooding eroded the foundations of bridges and motorways, which were often broken in chunks or blocked by fallen trees and electricity poles. Factory buildings were tilted, while a shipping container blew away and landed above cars in a parking lot.

"I woke up at 5 a.m. because of the explosive rain, and I got really concerned because the water rose right up to my doorway," Kim Seong-chang, a Pohang resident, said in an interview with JTBC. "The water was still thigh-high at 7 a.m. and those who parked their cars in the streets were in panic because their vehicles were submerged … Other residents were bucketing out water from their homes."

The storm dumped more than 41 inches of rain in central Jeju since Sunday, where winds peaked at 96 mph. Southern and eastern mainland regions also had damage — knocked off signboards and roofing, toppled trees, traffic signs and destroyed roads.

Around 370 domestic flights and 100 ferry services were grounded as the region braces for Typhoon Hinnamnor.

In Pohang, a woman in her 70s died after being swept away in flash floods, while another woman in her 60s was found dead in a submerged basement parking lot where searches were ongoing for seven people. Rescue workers had failed to respond to another man who called for help before he went missing, presumably swept by flash floods.

In the neighboring city of Gyeongju, a woman in her 80s died after her home was buried in a landslide. In Ulsan, another southern city, a 25-year-old man was unaccounted for after falling into a rain-swollen stream, according to the Ministry of the Interior and Safety.

Also in Pohang, firefighters extinguished flames that damaged at least three facilities at a major steel plant operated by POSCO. A presidential official, who spoke on condition of anonymity during a background briefing, said officials were investigating the cause of the fires.

Local fire officials said the flames destroyed a building housing electricity equipment and damaged a separate office building and a factory before being put out.

The Safety Ministry said about 3,200 among 4,500 people who had been forced to evacuate returned home Tuesday afternoon. More than 80 homes, buildings and factories were flooded or destroyed, and hundreds of roads, bridges and facilities were damaged.

More than 600 schools were closed or converted to online classes. Workers had managed to restore electricity to 78,890 of the 89,180 households that lost power.