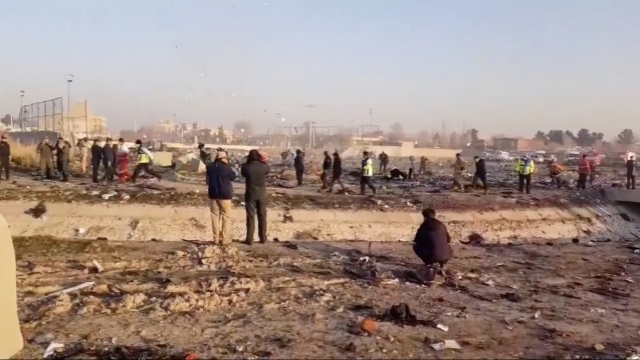 ​Canadian Prime Minister Justin Trudeau said evidence so far "indicates the plane was shot down by an Iranian surface-to-air missile."

The U.S. and Canada say they believe the Ukrainian airliner that crashed shortly after takeoff from Tehran on Wednesday was accidentally shot down by Iran.

Canadian Prime Minister Justin Trudeau said during a news conference on Thursday, evidence so far "indicates the plane was shot down by an Iranian surface-to-air missile."

"This may well have been unintentional," Trudeau said. "This new information reinforces the need for a thorough investigation into this matter. Canada is working with its allies to ensure that a thorough and credible investigation is conducted to determine the causes of this fatal crash."

The prime minister's announcement comes shortly after multiple U.S. officials said they believe the plane was mistakenly targeted by Iran's missile system, as it crashed shortly after Iran fired more than a dozen ballistic missiles at bases housing U.S. and coalition troops in Iraq. All 176 people on board were killed. The victims were from seven countries, including 82 Iranians, 63 Canadians and 11 Ukrainians.

During a news conference on Thursday, President Donald Trump said the incident may have been a tragic mistake.

"I have my suspicions. It was very – I don’t want to say that because other people have those suspicions also," President Trump said. "It's a tragic thing, when I see that, it's a tragic thing. But somebody could have made a mistake on the other side, could've made a mistake. It was flying and – not our system, no, it has nothing to do with us. It was flying in a pretty rough neighborhood and somebody could've made a mistake. Some people say it was mechanical; I personally don’t think that's even a question, personally."

Sources told CBS News U.S. satellites had detected two surface-to-air missile launches in Iran shortly before the plane exploded. Additionally, a U.S. official told The Wall Street Journal that a large swath of debris at the crash site pointed to the plane being shot down in mid-air, as opposed to having a mechanical failure.