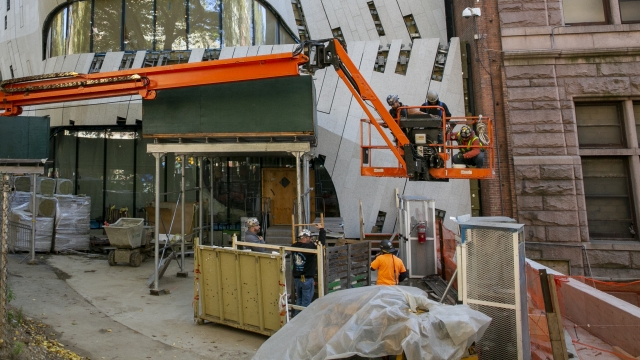 With not enough people available to fill jobs, businesses are having to offer higher pay to attract and keep workers.

The nation's employers kept hiring briskly in November despite high inflation and a slow-growing economy — a sign of resilience in the face of the Federal Reserve's aggressive interest rate hikes.

All year, as inflation has surged and the Fed has imposed ever-higher borrowing rates, America's labor market has defied skeptics, adding hundreds of thousands of jobs, month after month.

With not enough people available to fill jobs, businesses are having to offer higher pay to attract and keep workers. In November, average hourly pay jumped 5.1% compared with a year ago, a robust increase that is welcome news for workers but one that makes the Fed's efforts to curb inflation potentially more difficult. On a month-to-month basis, wages jumped 0.6% in November, breaking a streak of smaller gains that had suggested that pay growth might be cooling.

The strength of the hiring and pay gains raised immediate concerns that the Fed may now have to keep interest rates high even longer than many had assumed. The stock market reacted with alarm, with the Dow Jones Industrial Average sinking nearly 200 points in mid-morning trading Friday.

The Labor Department said Thursday that 1.61 million people were receiving jobless aid the week that ended Nov. 19, up 57,000 from the week before.

"This will be a reminder to the Fed and to the markets that the job on inflation is not done," said Blerina Uruci, chief U.S. economist at brokerage T. Rowe Price. "They really need wage pressures to be on a more sustained downward path. So that certainly calls for interest rates to remain higher for longer."

The report painted a picture of a job market in which the supply of available workers is falling just when many companies are still desperate to hire to meet customer demand. The proportion of Americans who either have a job or are looking for one declined for a second straight month, to 62.1%. Before the pandemic, that figure was 63.4%; the drop since then translates into about 3 million people.

Since the pandemic, many older workers have taken early retirement. In addition, several hundred thousand working-age people have died from COVID-19. And many families have struggled to find or afford child care, leaving some adults unable to return to work.

This week, Fed Chair Jerome Powell stressed in a speech that jobs and wages were growing too fast for the central bank to quickly slow inflation. The Fed has jacked up its benchmark rate, from near zero in March to nearly 4%, to try to wrestle inflation back toward its 2% annual target.

In his speech, Powell noted that most supply chain problems have been remedied, thereby helping lower prices for such goods as furniture, cars and electronics. Gas prices are also falling, he said, and housing costs, a big driver of inflation, should drop next year.

Yet Powell pointed to prices in services like health care and restaurants as longer-term drivers of inflation. And rising wages are a key factor in raising those costs.

In the meantime, many employers are still determined to add workers. Among them is Aaron Glaser, who owns four auto body shops in the Louisville, Kentucky, metro area. Glaser said he was desperate to hire at least six more people. He would add 14 more if he could find them.

"We're busier now than we've ever been," he said. "We can't fix more cars because there aren't enough people."

Why Is Quick Quitting Gaining Momentum?

A LinkedIn study found the short tenure rate is up almost 10% in the past year.

Glaser, who has owned the business for about 30 years, is still grappling with a shortage of parts, particularly for Honda and Kia vehicles. He estimates that between his labor and product shortages, it can now take twice as long to repair a crashed vehicle than it did before the pandemic.

He said he has raised pay roughly 15% to try to attract more people and is offering more flexibility to his workers. He now closes Friday afternoon to give employees an extra half-day off.

Glaser blames the closing of many trade schools in the region for reducing the number of people with auto repair skills.

Nationally, there were some signs of weakness in Friday's hiring figures: Retailers, transportation and warehousing companies all cut jobs. So did temporary staffing agencies. Temp employment, often seen as a leading indicator of hiring, has declined for three straight months.

As a result, more than half the job growth last month — 170,000 — came from just two large industries: Education and health care, and a category made up mostly of restaurants, hotels, and entertainment firms. Both sectors are still replacing workers who were lost during the pandemic. Most other industries have surpassed their pre-pandemic levels of employment.

Yet a category that includes technology workers actually added jobs, despite many recent high-profile layoff announcements from such tech companies as Amazon, Meta, Twitter and the real estate broker Redfin.

Some signs of modest cooling in the job market have emerged recently. They include a small decline in job postings and a drop in the number of people who are quitting jobs — trends that suggest some rising caution among workers.

Even so, steady hiring and rising paychecks in many industries have helped U.S. households drive the economy. In October, consumer spending rose at a healthy pace even after adjusting for inflation. Americans stepped up their purchases of cars, restaurant meals and other services.

After having contracted in the first six months of the year, the U.S. economy expanded at a brisk 2.9% annual rate last quarter. In addition to strength from consumer spending, a spike in exports helped boost growth.

Though steady hiring and rising wages have fueled their spending, Americans are also turning increasingly to credit cards to keep up with higher prices. Many are also digging into savings, a trend that cannot continue indefinitely.

Some signs of weakness have sparked concerns about a likely recession next year, in part because many fear that the Fed's surging rate hikes will end up derailing the economy. Particularly in the technology, media and retail industries, a rising number of companies have made high-profile layoff announcements.

In addition to job cuts from tech behemoths, other firms are also announcing layoffs, including DoorDash, the real estate firm Redfin and the retailers Best Buy and the Gap.

And in November, a measure of factory activity dropped to a level that suggested that the manufacturing sector is contracting for the first time since May 2020.