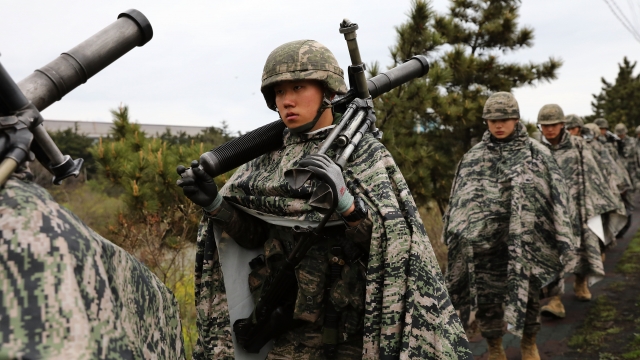 The drills will focus on verifying Seoul's "capabilities for its envisioned retaking of wartime operational control" of its troops from Washington.

The U.S. and South Korea are planning to hold their annual joint military exercises despite North Korea's objections.

A South Korean Defense Ministry spokesperson said the drills will focus on verifying "[Seoul's] capabilities for its envisioned retaking of wartime operational control" of its troops from Washington.

The news comes shortly after Pyongyang test-fired multiple weapons, including two new short-range ballistic missiles toward the Sea of Japan. The country said the move was "part of the power demonstration to send a solemn warning to the South Korean military." Last month, North Korea threatened to resume nuclear and missile tests over the joint exercises, saying the drills violate promises President Donald Trump made to North Korean leader Kim Jong-un last year.

Last year, the U.S. announced some of the exercises would be indefinitely suspended as a gesture of good faith to North Korea as denuclearization talks were underway. Earlier this year, the U.S. and South Korea said they'd no longer hold their two annual large-scale joint military drills and instead carry out a couple smaller operations, which North Korea still opposes.

President Trump said after his last meeting with Kim that both countries have agreed to resume denuclearization talks. North Korea had said it will wait to see if the exercises actually take place to decide on the fate of its diplomacy with the U.S.