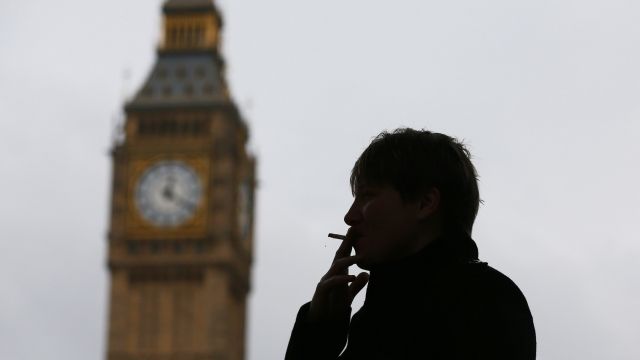 Cigarette makers won't have an opportunity to differentiate themselves through packaging, and all packs will show graphic images of side effects.

Starting this weekend, all smokers in the U.K. will be carrying a very different pack of cigarettes, no matter what brand they choose.

All packs sold in the U.K. now have to have the same color and font type. Instead of company logos, packs will showcase graphic images of smoking's potential side effects.

It's the result of a new law that went into effect last year, but companies had until May 21, 2017, to sell their old stocks.

A recent study predicted the change in packaging will lead to 300,000 fewer smokers within a year of implementation.

But how much of an effect that really amounts to is up for debate.

The study highlighted Australia, which imposed similar packaging restrictions years before the U.K. But three years after its law went into effect, smoking's prevalence in Australia hadn't even dropped one percentage point.

And in the U.K.'s case, even if 300,000 people stopped smoking due to the packaging, there'd still be millions of people continuing the habit in spite of it.

The Majority Of Global Smoking Deaths Come From These 4 Countries

A new medical study found half of the world's cigarette-related deaths come from just four countries: China, India, Russia and the U.S.

Still, one argument from advocates is that these laws were made with younger people in mind. The idea is to convince them not to take up smoking in the first place.

An estimated two-thirds of British smokers start before they're 18 years old.