Outrage Over Immigration Ban Makes Its Way To UK Parliament 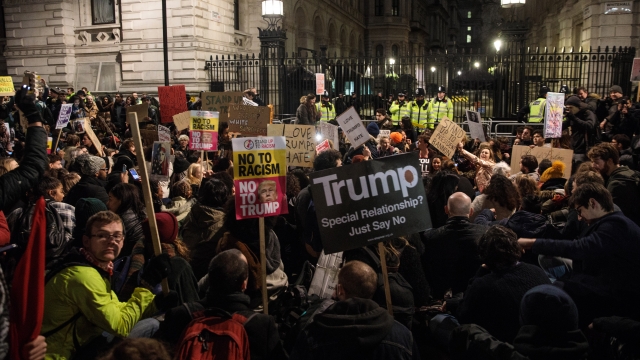 Outrage over President Donald Trump's immigration ban has made its way across the Atlantic to the U.K. Parliament. And Monday night, the House of Commons voted unanimously to call for its repeal.

"Since its foundation, Mr. Speaker, the United States has been built on the back of immigrants across the world," Labour Party MP Edward Miliband said at the beginning of the emergency session.

"I learned, Mr. Speaker, that this great nation had put in place measures that would prevent mine and my family's ability to travel, study and feel welcome there," Conservative MP Nadhim Zahawi said. Zahawi was born in Iraq but is a British citizen. His sons attend universities in the United States.

The motion was this: "That this house has considered the matter of the need for repeal of President Trump's discriminatory, divisive and counterproductive ban on entry to the United States for people from seven predominantly Muslim countries and the indefinite ban placed on Syrian refugees."

The vote came after members of opposing parties joined together to hold an emergency debate on Trump's executive order.

The order Trump signed Friday bars people from seven Muslim-majority countries from entering the United States. It suspends refugee admissions for 120 days, with an indefinite suspension on Syrian refugees.

Howard Schultz said "the promise of the American Dream [is] being called into question."

The emergency debate was the second time members of the House of Commons discussed the order.

"This is not our policy — nor is it a measure that this government would consider," Johnson said in his opening address.

"Will the foreign secretary for a moment try to recall, along with me, what it was like as I hid under the stairs when two fascist dictators, Mussolini and Hitler, were raining bombs on towns and cities in Britain? Now, this government are hand in hand with another fascist: Trump," Labour Party MP Dennis Skinner said.

A petition on Parliament's website calls for Trump not to have an official state visit. It has received more than one million signatures, most of which were added over the weekend.

The petition doesn't call for Trump to be barred from entering the U.K. Rather, it says, "He should not be invited to make an official State Visit because it would cause embarrassment to Her Majesty the Queen."

Nearly Half Of Voters Were Supportive Of Immigration Restrictions

In a poll conducted early this month, 48 percent of participants said they supported "suspending immigration from 'terror prone' regions."

According to CNN, a British lawyer created the petition two months ago, and it had only received a few hundred signatures. But once Trump signed the executive order Friday, word of the petition spread.

But the BBC, citing unnamed officials, said Prime Minister Theresa May won't withdraw her invitation to Trump for an official state visit.