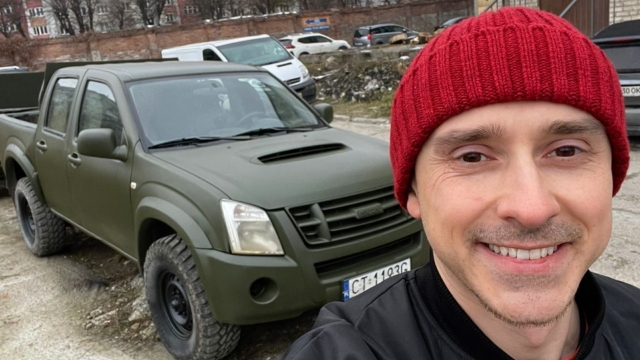 A Ukrainian software engineer is procuring used civilian cars and trucks and souping them up to survive battle.

For front line vehicles in Ukraine, war is hell.

Without enough military equipment, many units there go into battle in civilian cars and trucks. So many are destroyed on first impact with shrapnel that fighters are constantly desperate for more.

But instead of traditional military supply lines, they turn to volunteers like Max Titov.

"We got a request from a friend of mine who volunteered for the army," Titov said. "He reached out to me and said, 'You know, Max, we need a pickup truck.'"

Titov, a 37-year-old software engineer, purchases used vehicles from all over Europe. Then, he and his team hack them into four-wheeled fighting vehicles.

"The next stage is armoring and then back to the front line ... usually a steel plate, 8 to 15 millimeters, really depends on the vehicle, how much it can carry," Titov said.

Through trial and error, his team figured out that 8-millimeter steel plates are the sweet spot for protecting the soldiers, and also the engine.

"In case the shell explodes, at least the engine stays intact, and the group can evacuate," Titov said. "Even the tires broken down, everything blows up, you still can drive and you still can escape."

Titov says machine gun fire can still pierce the armor, but if he welds in protection that's too heavy, the vehicle loses its speed and agility — the main advantage of light vehicles.

One truck, courtesy of Titov, has an anti-aircraft weapon in its bed. Ukraine's 57th motorized brigade hunts Russian fighter jets. In what's known as shoot-and-scoot, they fire, and then must move fast to avoid being hit by Russian artillery.

"The lifespan of the car on the front lines is [about] three months," Titov said. "There [are] exceptions, and there are some units who are really good at breaking stuff."

A shell exploded near one of 13 vehicles Titov deployed to the 57th, punching hundreds of holes in the chassis and killing the engine, but the soldiers inside survived.

"Those guys are really going around a lot and hunting for the Russian airplanes, helicopters and cruise missiles," Titov said.

Though it may seem ad hoc for people like Titov to be procuring and preparing soldiers' vehicles, that's how, for the Ukrainian side, this war works.

NEWSY'S JASON BELLINI: It seems like you almost "adopt" a unit.

MAX TITOV: One of my friends is referring to me like the private volunteer of his.

Titov said he's developed friendships with many of the front-line units. Recently, he had to bury one of his friends — a coworker and fellow software engineer named Yura Osadchuk. He was a soldier with the 57th, killed by Russians in October.

"He was a bright guy," Titov said. "He knew three languages. He was working in IT."

When Russia invaded Ukraine, Titov had no military experience, so he joined the ranks of what is known as a second army in Ukraine — volunteers equipping soldiers on the front line.

"I feel this sort of need inside of me to participate," Titov said. "I can't just stay and watch. That's just not me."

Titov said he didn't really know much about vehicles or fixing them, but he learned about it along the way. His only experience with cars was leading a team doing engineering for a California startup that does mileage tracking. That's still his day job.

As for costs, a friend who owns a repair shop volunteers its use and also pays for the labor of his mechanics. The used cars cost around $6,000 each, and the money Titov uses to purchase them — 19 vehicles thus far — mostly comes from online fundraising.

Most of the donors are members of Ukraine's tech community, supporting peers who traded keyboards for Kalashnikov rifles.

For Titov, return on investment is measured in the lives saved by his vehicles' protection.

"We're losing really good people in this war,like all of those bright minds who could have served this world, this planet," Titov said. "Maybe one of those could have found the cure from cancer or whatever, and now it's not going to happen. But we also saved a lot of lives already by putting the armor."

We are at Netherlands 🇳🇱 looking to buy pickup trucks. Everyday we check 6-8 different shops and owners. So many cars has rotten chassis. I confidenly say that Europe is running out of used pickup trucks, Ukraine bought it all 😅 pic.twitter.com/2Ut2v4UKZW

Fighting-age men in Ukraine are barred from crossing the border, but Titov was able to get special permission to leave to look for more vehicles to purchase. He went to several European countries, and after visiting around eight shops per day, he wrote on Twitter that he could "confidently say that Europe is running out of used pickup trucks. Ukraine bought them all."