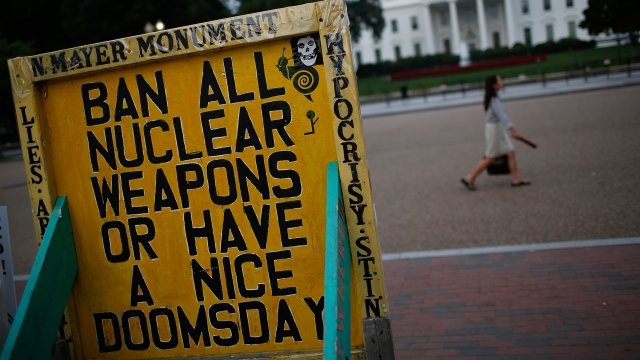 A group of 122 nations endorsed the treaty, which would make any production, storage, use or threat of use of nuclear weapons illegal.

A treaty approved by 122 countries made a clear statement: Nuclear weapons should be illegal in every sense of the term.

A group of United Nations member states met in New York on Friday to approve the Treaty on the Prohibition of Nuclear Weapons.

But there's just one problem: None of those countries actually have any nukes.

The goal of the treaty isn't to get rid of nuclear weapons right away. Instead, supporters say they want nukes to be delegitimized and stigmatized in the same way chemical weapons and land mines have been.

It would prohibit steps to "develop, test, produce, manufacture, acquire, possess or stockpile nuclear weapons ... as well as the use or threat of use of these weapons."

Countries will be able to sign the treaty at the U.N. Headquarters in New York in September.

The treaty would take effect 90 days after being ratified by at least 50 countries.