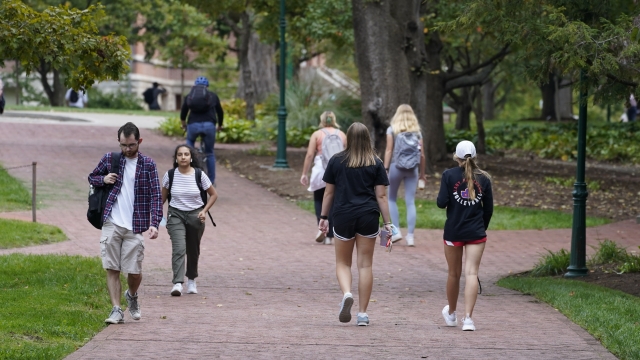 More college campuses are introducing recovery groups and programs to help fight the stigma of sober living while in university.

For some, the idea of sobriety in college is a bit of an oxymoron, at least according to film and pop culture. But across the U.S., the number of recovery groups have grown, with campuses sometimes encouraging recovery in unconventional ways.

Across campuses in Virginia are recovery bikes, meant to serve as both a piece of art and a conversation starter over coffee. The contraption at the University of Mary Washington that makes the cup of coffee takes around five minutes.

"During that time, we're able to engage the person in a conversation about what it is to be in recovery," said Ray Tuttle, university director of judicial affairs.

It's part of Eagles in Recovery, a peer-led program meant to foster sobriety among students through one-on-one counseling and group support.

That's just one of hundreds of Collegiate Recovery Programs across the country.

Now far removed from the days of "Animal House" or even "Old School," there seems to be a growing acceptance on campuses for those who don't drink, with many schools hosting alcohol-free events. Plus, social media has been filled with videos of support, and even tips, for fellow students.

A study sponsored by the National Institute of Health showed a decrease in past year, past month and daily alcohol consumption. However, there's been a rise in binge drinking, marijuana and hallucinogen use. Provisional data from the CDC shows an uptick in overdose deaths from drugs like fentanyl.

Kristina Canfield is executive director of The Association of Recovery in Higher Education, an organization helping campuses set up recovery groups like the one at UMW.

"We need to celebrate and normalize the trending downward, but we have to pay attention to the death piece," she said.

Naltrexone is already FDA approved, but not as an implant. Options are being studied and if all goes well, one could be greenlighted in 2024.

Canfield is passionate about the issue because she lived it as college student in recovery.

"I was taught as a young person in recovery to not talk about it," Canfield said. "You don't tell people you're in recovery. It was real fun trying to answer questions of, 'What happened to you? Where'd you go?'"

While stigma may be decreasing among young people, Canfield says there is still a lot of the hesitation from school administrators concerned about how the school will be perceived.

"I still get a little blindsided, I think, when I hear an administrator say something like, 'Why would we want those students here?'" Canfield said.

The reality is that 2% of students identify as being in recovery, according to a 2022 survey from the American College Health Association.

Yale Psychiatrist Amanda Calhoun says there are reasons for that, including external factors like the pressure of academics and biological causes.

Both say colleges can be a first line of defense in shaking off stigma for students already in recovery and those who may need support.

"Normalizing and expecting that substance use will occur at these parties rather than saying nobody drank, nobody use substances, because that's just we know that's not the reality," Calhoun said.

Tuttle agrees, saying no matter where or how the addiction began, the road to recovery can start in college without shame.

"Just like a good cup of coffee, it takes time," Tuttle said. "It's not just pressing a button. It's not just, 'Here's a cup of coffee.' It takes a little while before it happens, and that's what recovery is too."