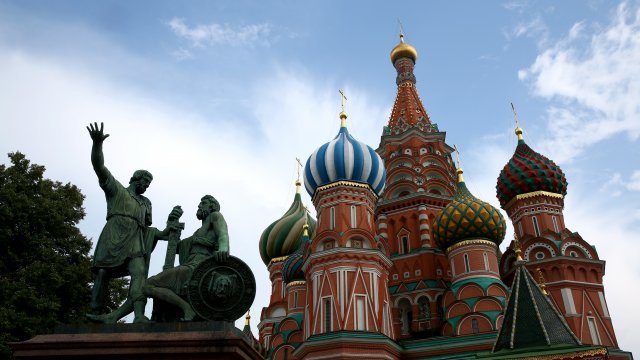 The U.S. Embassy in Moscow has temporarily stopped issuing nonimmigrant visas to Russians.

The U.S. State Department is taking a hard stance on Russia despite President Trump's seeming reluctance to do so.

The U.S. Embassy in Moscow announced Monday it would temporarily stop issuing nonimmigrant visas to Russians. That most likely means hundred of thousands of visas will be delayed.

The move is in direct response to Russian President Vladimir Putin's order to cut over 700 U.S. diplomats in Russia — something Trump has made light of in the past.

Trump told reporters, "I want to thank him because we're trying to cut down on payroll."

But it was no laughing matter to U.S. government staff in Russia. In a statement Monday, they said, "Russia's decision to reduce the United States' diplomatic presence here calls into question Russia's seriousness about pursuing better relations."

Putin ordered the removal because of the U.S.-issued sanctions on Russia for meddling in the 2016 presidential election.

But Trump called the sanctions bill "seriously flawed" and said it "improperly encroaches" on his executive power.

And Trump has previously questioned the U.S. intelligence assessment that Russia was behind the hack, saying other countries might have been responsible as well.

The halt on nonimmigrant visas will end Sept. 1. After that, Russians will be able to receive them at the U.S. Embassy in Moscow but not at any other consultates.