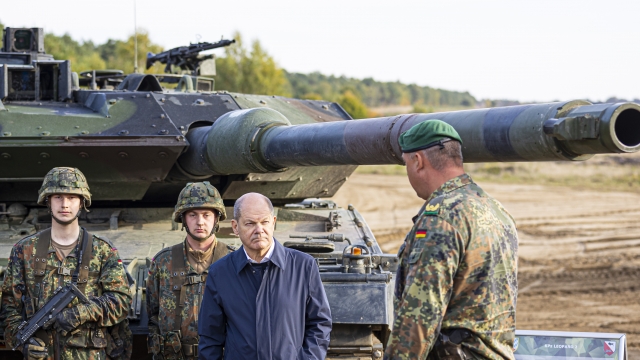 Germany and the United States announced Wednesday that they will send advanced battle tanks to Ukraine, offering what one expert called an "armored punching force" to help Kyiv break combat stalemates as the Russian invasion enters its 12th month.

The announcement marked the first stage of a coordinated effort by the West to provide dozens of the heavy weapons, which Ukrainian military commanders said would enable counter-offensives, reduce casualties and help restore dwindling ammunition supplies.

American President Joe Biden said the U.S. will send 31 M1 Abrams tanks, reversing months of persistent arguments by Washington that they were too difficult for Ukrainian troops to operate and maintain.

The U.S. decision followed Germany's agreement to send 14 Leopard 2 A6 tanks from its own stocks. Germany had refused to send the Leopards unless the U.S. put its Abrams on the table, not wanting to incur Russia's wrath without the U.S. making a similar commitment.

"This is the result of intensive consultations, once again, with our allies and international partners," Chancellor Olaf Scholz told German lawmakers. "It was right, and it is important that we didn't let ourselves be driven" into the decision.

Poland wants to send German-built Leopard 2 battle tanks to Ukraine. The country may send them to the non-NATO country, even without permission.

"To liberate their land, they need to be able to counter Russia's evolving tactics and strategy on the battlefield in the very near term," President Biden said.

Several European countries have equipped their armies with Leopard 2 tanks, and Germany's announcement means they can give some of their stocks to Ukraine.

Speaking in a video address late Wednesday, Ukrainian President Volodymyr Zelenskyy hailed the creation of what he described as a "tank coalition."

"We must form a tank fist, a fist of freedom whose hits will not let tyranny stand up again," Zelenskyy said.

He said Ukraine will push for more weapons, including long-range missiles and aircraft.

"The terrorist state must lose. The right to life must be protected. And it will be so," Zelenskyy said.

Though it will take months before the tanks arrive, Ukrainian soldiers on the front lines said the decision comes at a critical point.

"Tanks will help reduce casualties among our soldiers … then gain new results and win this war quicker," said Oleksander Syrotiuk, commander of a company in the 17th Tank Brigade deployed in Bakhmut.

Ukrainian soldiers and experts said Ukrainian forces are running low on spare parts to repair old Soviet-era tanks and the specific ammunition they require while enduring relentless barrages of Russian artillery. The Western tanks could help open a new pipeline for ammunition to flow to Ukraine.

"Without the new tanks, we cannot win this war," said Maksim Butolin, chief sergeant of the 54th Brigade's Tank Division. He spoke to the AP by phone earlier this week from near the Bakhmut front.

Ukrainian forces have had to preserve ammunition and deal with frequent breakdowns and maintenance issues, Syrotiuk said.

"The main problem we have with our tanks is they are old," he said.

Expressing a preference for the Leopard 2, which he said was more suitable for Ukraine's terrain, Syrotiuk said the modern tanks had more precise targeting systems, better armor and equipment to allow nighttime operations.

Gian Gentile, a U.S. Army veteran and senior historian with the Rand think tank, said the M1 Abrams and the Leopards will give Ukraine a "mechanized armored punching force."

The Abrams tanks can hit a moving target up to 2,000 meters (1.25 miles) away while rolling across rough terrain, he said.

Altogether, France, the U.K., the U.S., Poland, Germany, the Netherlands and Sweden will send hundreds of tanks and heavy armored vehicles to fortify Ukraine as it attempts to break through entrenched Russian lines.

Ukraine's supporters have supplied tanks in the past, but those were Soviet models in the stockpiles of countries that once were in Moscow's sphere of influence but are now aligned with the West. Zelenskyy and other Ukrainian officials insisted their forces need more modern Western-designed tanks.

Russia's ambassador to Germany, Sergey Nechayev, called Berlin's decision "extremely dangerous," saying it "shifts the conflict to a new level of confrontation and contradicts the statements of German politicians about their reluctance to get involved in it."

Scholz had insisted that any decision to provide Ukraine with the powerful tanks would need to be taken in conjunction with Germany's allies, chiefly the U.S. By getting Washington to commit some of its own tanks, Berlin hopes to share the risk of any backlash from Russia.

Ekkehard Brose, head of the German military's Federal Academy for Security Policy, noted the deeper historical significance of the decision.

"German-made tanks will face off against Russian tanks in Ukraine once more," he said, adding that this was "not an easy thought" for Germany, which takes seriously its responsibility for the horrors of World War II.

"And yet it is the right decision," Brose said, arguing that it was up to Western democracies to help Ukraine stop Russia's military campaign.

German Defense Minister Boris Pistorius cautioned that it would take about three months for the first tanks to be deployed in Ukraine. He described the Leopard 2 as "the best battle tank in the world."

The German government said it planned to swiftly begin training Ukrainian tank crews in Germany. The package being put together would also include logistics, ammunition and maintenance.

Kremlin spokesman Dmitry Peskov said the tanks would "burn down."

"Simply because of technological aspects, this is a rather disastrous plan," Peskov said, citing "a completely obvious overestimation of the potential" the tanks would add to the Ukrainian military. "It is yet another fallacy, a rather profound one."

Peskov predicted that the tanks "will burn down just like all the other ones. ... Except they cost a lot, and this will fall on the shoulders of European taxpayers."

John Herbst, who was U.S. ambassador to Ukraine from 2003 to 2006, questioned the timeline for delivery of the American tanks.

"Under this schedule, Ukraine would be lucky to receive them this calendar year," said Herbst, who is now senior director of the Atlantic Council's Eurasia Center.

Other European nations, such as Finland and Spain, indicated a willingness Wednesday to part with their own Leopard or similar battle tanks as part of a larger coalition.