How US Open Winner Naomi Osaka Is Redefining 'Japanese' 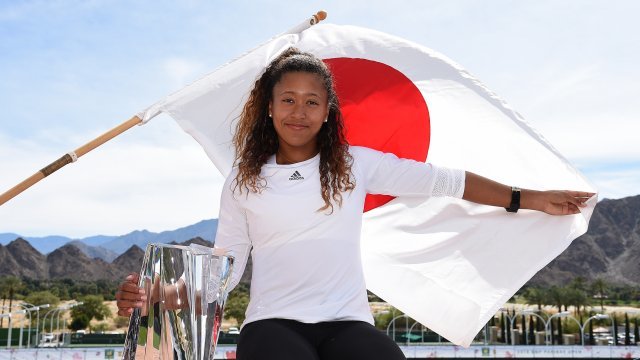 By representing a country known for its racial homogeneity, the biracial tennis champion is also challenging what it means to be Japanese.

When it comes to the 2018 U.S. Open, it seems like the only thing people want to talk about is the altercation between Serena Williams and the umpire. And that's extremely unfortunate because the tournament's winner, 20-year-old Naomi Osaka, surely deserves the spotlight too.

She is the first Japanese tennis player to ever win a Grand Slam and is of course becoming a big deal in her home country. But there's one particular group of fans to whom she means the world: biracial Japanese or "hafu." The term comes from the English word "half."

"We love what she represents. And she's definitely breaking down barriers in terms of what it means to be Japanese, and nationality, identity, and mold and ethnicity," said Lara Perez Takagi, who has a Japanese mother and a Spanish father.

USTA Reviewing Policies After Umpire Issues At US Open

Some of the most talked about umpire issues were the controversial calls made during Serena Williams' match against Naomi Osaka.

Osaka was born in Japan to a Japanese mother and a Haitian father but moved to Florida when she was 3. While she has Japanese and American citizenships, her father decided she would play for Japan. And representing an island known for its racial homogeneity presents a great opportunity for her to challenge what it means to be Japanese.

"I could see many cultural traits in her speeches and mannerisms that remind me of myself, because I also grew up with a Japanese mother," Perez Takagi said.

Like Osaka, Lara Perez Takagi was born in Japan but grew up abroad. As a young adult, Perez Takagi moved to Tokyo to study film where she met and spent time with other "hafus."

"I found such a massive community of people who I could relate to that it made me very curious," Perez Takagi said.

Her curiosity led her to produce, with another "hafu" friend, a documentary portraying the lives of biracial Japanese people from diverse backgrounds.

"In Japan, there's a very superficial image of 'hafus.' It's mostly based off of models and TV talents, and they're all mostly white and Japanese mixes. And it's quite difficult for you every day having to explain yourself, because people will always ask you, 'So, where are you from?' and 'Why do you speak Japanese so well?' We had so many 'hafus' reaching out to us, telling us, 'this was the film I wish I had watched growing up,' and the support was amazing," Perez Takagi said.

The aging trend is not restricted to Serena Williams, Federer, Nadal and Djokovic. It's widespread and happening both in men's and women's tennis.

"The definition of Japanese is very rigid, it's very strict. And she doesn't fit the typical picture of a Japanese person that most people retain. So if she was walking down the street and she spoke Japanese, people would be like, 'Wow, you speak Japanese?' And I don't think that a tennis player or a beauty pageant winner is going to change that. It's not going to change overnight, it's a slow process," McNeil said.

He added: "You remember recently in France with the World Cup? A lot of the French players are of African descent. And It's kind of a similar situation: France embraces these African athletes as a result of their win. But otherwise, there's a great deal of discrimination and racism that occurs in France."

McNeil is originally from Brooklyn, but he has been living in Japan for 14 years and feels very much at home there. But he says it's about time the country and media pays attention to the growing number of foreigners and mixed-race people living in Japan — and not just the famous ones.

He said: "I think Japan — whether they embrace it or not — is headed towards a more diverse future, and if they take these opportunities to not just praise Naomi but to tackle the difficult questions that need to be discussed and need to be addressed ... This is a great opportunity and it's a teachable moment, and I hope that Japan takes a chance to sit down and learn it."