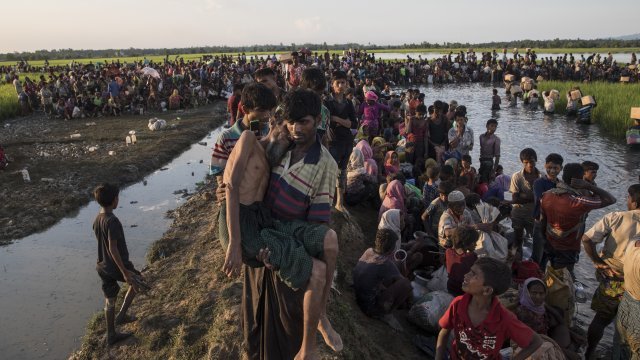 The U.S. is also considering officially declaring violence against the country's Rohingya Muslims as ethnic cleansing.

The U.S. is cracking down on Myanmar for failing to sufficiently address its humanitarian crisis involving Rohingya Muslims.

State Department spokesperson Heather Nauert said Monday that any military officers or units operating in northern Rakhine State, where most Rohingya reside, will be ineligible to receive or participate in U.S. assistance programs.

The U.S. gave Myanmar more than $50 million for humanitarian needs in fiscal year 2015. Now, the State Department is considering economic sanctions against it.

After Conflict And Violence, These Refugee Kids Draw What They Saw

UNICEF says about 1 in 4 kids live in a conflict or disaster zone.

The U.S. ended travel waivers for Burmese military officials back in August.

Rohingya Muslims are a minority group that are largely shunned by Myanmar's mostly Buddhist population. The country doesn't consider them citizens, and rights groups say they're often targets of police brutality and other forms of discrimination.

More than 600,000 refugees have fled Myanmar, largely to Bangladesh, since August. Myanmar's de facto leader, Aung San Suu Kyi, has been mostly silent on the issue.

The State Department announcement shouldn't come as a complete shock. Last week, Secretary of State Rex Tillerson said the U.S. was "extraordinarily concerned" about the situation and that "the world can't just stand idly by and be witness to the atrocities" in Myanmar.

In September, the United Nations said Myanmar had one "last chance" to essentially get its act together before it had an irreversible tragedy on its hands.

The U.S. is also considering officially declaring the violence in Myanmar ethnic cleansing.