US Puts More Pressure On Venezuela's Maduro To Step Down 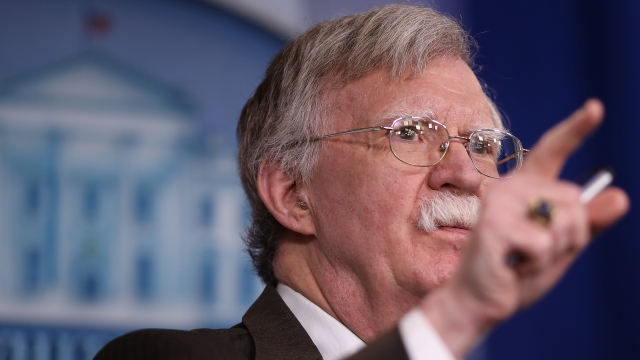 The United States is ratcheting up pressure on Venezuela's Nicolás Maduro to step down. On Wednesday, U.S. officials announced plans to increase sanctions on foreign banks associated with Maduro, as well as revoke visas from high-ranking Venezuelans.

National Security Adviser John Bolton said in a statement that Washington is putting foreign financial institutions "on notice that they will face sanctions for being involved in facilitating illegitimate transactions that benefit Nicolás Maduro and his corrupt network."

Pence said: "But I promise all my fellow Americans in the room will continue to stand strong. In fact today, the State Department is announcing that the United States will revoke 77 visas, including many officials of the Maduro regime and their families. We will continue to hold the Maduro regime accountable until libertad is restored in Venezuela."

The U.S. has already imposed numerous sanctions on Venezuela, following a heated few months in the South American nation. In January, Juan Guaidó declared himself Venezuela's interim president, and he's received wide support from other countries, including the U.S. But current president Nicolás Maduro refuses to relinquish power. He was sworn in for a second term earlier this year, despite accusations that the election was fraudulent.

Guaidó is calling for Europe to also tighten financial sanctions against Maduro's government, citing the expulsion of Germany's diplomat as reason for a "sharp" reaction.

However, it's questionable whether sanctions are effective. On Wednesday, the U.N. human rights chief claimed sanctions have made the economic and political situation in Venezuela worse.