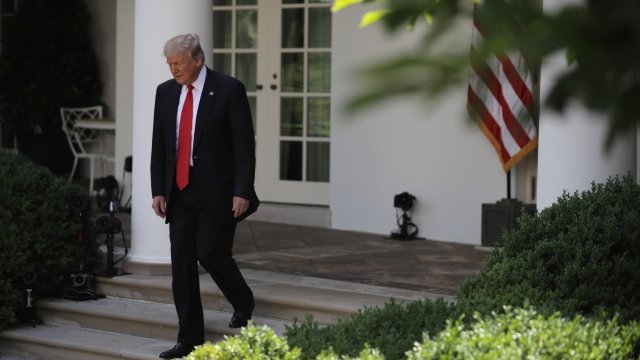 According to the agreement, no country can officially withdraw until 2020.

The U.S. still plans to withdraw from the Paris climate agreement. That's the message the U.S. Department of State sent to the United Nations on Friday.

But there's a catch — the U.S. can't actually leave for another three years.

When 193 countries, Palestine and the EU signed the agreement, they agreed that no country could officially leave the agreement until 2020. Members aren't even supposed to announce plans to withdraw until November 2019.

That's where the message to the U.N. comes into play.

It said the U.S. will withdraw "as soon as it is eligible to do so." In the meantime, the U.S. will "continue to participate in international climate change negotiations and meetings."

The U.S. will still play a role in climate discussions because, well, it has to.

Not a whole lot of the Paris agreement is actually legally binding. But the parts that are require members to do things like participate in meetings.

Despite the fact that each member country's pledge to cut emissions was voluntary, President Donald Trump has called the deal "unfair." While he's signaled he'd be willing to negotiate the U.S.' re-entry to the agreement, the U.N. says the accord "cannot be renegotiated based on the request of a single party."