US Withdraws From Global UN Pact Aimed At Helping Migrants 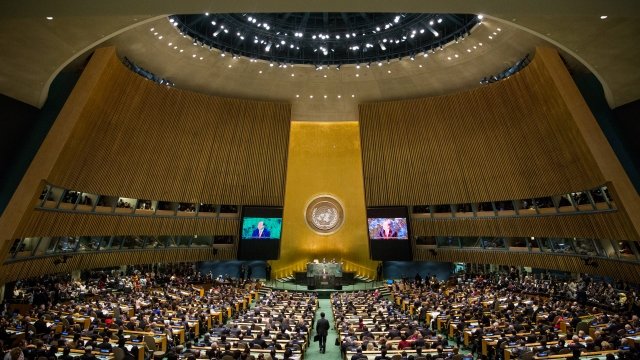 The pact isn't finalized yet, but it aims to provide help to migrants worldwide.

The U.S. has announced it will be leaving the United Nations' Global Compact for Migration due to concerns it undermines U.S. sovereignty.

The compact was formed in 2016 when all 193 members of the U.N. adopted the non-binding New York Declaration for Refugees and Migrants. The U.N. aims to produce a final compact on the subject by late 2018.

The declaration says member states will work to protect migrants, attempt to integrate migrants, combat xenophobia and strengthen global cooperation on migration — among other issues. There are around 60 million displaced people worldwide.

In a statement, U.S. Ambassador to the U.N. Nikki Haley said: "America is proud of our immigrant heritage. ... But our decisions on immigration policies must always be made by Americans and Americans alone."

The decision to pull out of the compact comes as a number of countries are preparing to meet in Mexico on Monday for a global conference on migration.

According to a report in Foreign Policy, a group of national security advisers met with President Donald Trump last week to discuss sitting out the conference. Haley reportedly said the U.S. should continue to take part in the negotiation process.

A spokesperson for the president of the U.N. General Assembly says the U.S. role in the compact process is critical and that migration's a global issue that needs global response.