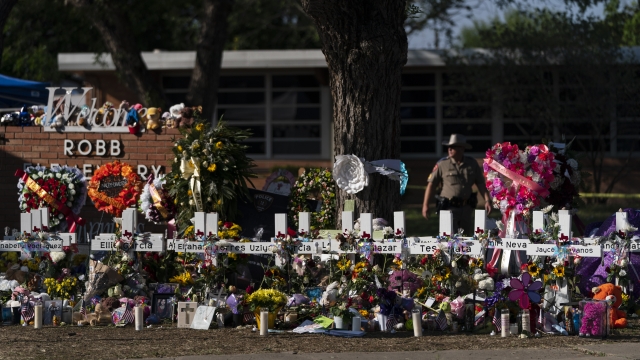 Dozens of survivors of the mass shooting in Uvalde, Texas, filed a federal lawsuit against local and state law enforcement agencies that responded to the May 24 attack.

The lawsuit asks for $27 billion and alleges a top-to-bottom failure to respond to the active shooter situation at Robb Elementary that resulted in the deaths of 19 school children and two teachers — a failure blamed on not following their own active shooter training and tactics and saying state police were ordered to disregard their own training.

The suit says local police and the school district engaged in a culture of noncompliance with regard to school safety standards and door locks.

An investigation revealed severe mishaps by law enforcement during the shooting, including that officers waited over an hour to confront the gunman holed up in fourth grade classrooms.

"We need policy changes for law enforcement that will do what they're supposed to do, which is serve and protect," said Charles Bonner, attorney for the lawsuit. "Here.... they did neither."

The suit focuses on the pain and suffering and mental anguish of the student survivors, their parents and other staffers including a school bus driver. It describes the post traumatic stress of a student identified as "JP," saying since May 24, "he has refused to either leave his house or his parents side..." and "obsessively draws the window blinds to his house and repeatedly locks its doors and sleeps in his parent's room."

Newsy asked for a response from the agencies and authorities involved: The city of Uvalde says it's not commenting on pending litigation — neither is the school district — but said in an email it continues to focus "on supporting our students and their families as we continue to navigate these unprecedented times."