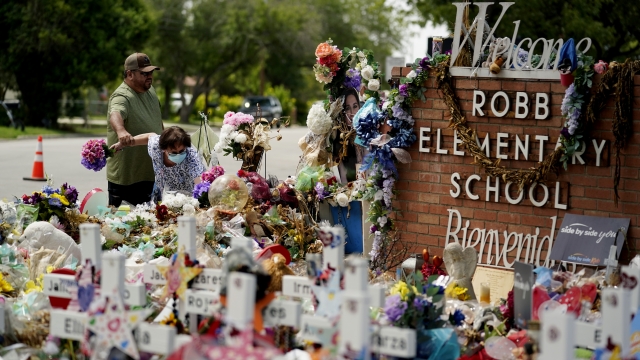 The Uvalde CISD School Board approved a three-week delay to the school year this summer.

Across the nation school is underway.

But in the small town of Uvalde, Texas, the tragedy that rocked Robb Elementary School forced parents to rethink the new school year.

"Just the thought of her going back to school just kind of made my stomach turn," said Priscilla Rubio.

Rubio's 10-year-old daughter was in class when a gunman walked in and killed 21 people.

The trauma played a role in her future education.

"I asked her how she felt and if she felt comfortable going back to school. And she just said, 'I don't know. I don't know, Mom,'" said Rubio.

Seeking peace of mind and safety reassurance, Rubio switched her two kids from public school to a private school that invested $1.5 million for the new school year on things like a new security system.

"It was the fact that this was the first school that I knew about that was making changes right away after the tragedy," said Rubio.

"I don't know about anybody else here but when you drive up to the high school, does anybody see anything different?" said Laura Garza, a mother of five, as she raised concerns at a recent school board meeting.

"I just don't feel like there's enough changes. And I don't think they're anywhere near ready," Garza said when asked if her children were going back to school there.

Garza enrolled her kids in a school nearly an hour away from home.

For some students, the decision to attend in person may come down to the wire.

Jazmin ruled out private schools, and she's not sure virtual learning is a good fit.

An experience that's left her parents on edge as Uvalde gears up for the first day of school.

But some of their security plan isn't finished — including completing a fencing project — an announcement that angered parents.

"You have to be patient because I don't want us to do anything the wrong way," said Laura Perez, a school board member.

"I have that fear of something happening again," said Javier Cazares, Jackie and Jazmin's father.

Fear is only one of many emotions students are feeling.

If there is one sliver of comfort, Priscilla Rubio says her daughter, who started her Catholic school classes in August, is excelling, even expressing her thoughts and feelings through art.

Rubio read from a poem her daughter wrote: "I hear people crying, laughing. I see people's dreams." And she explained a painting she made: "To her it means this is what heaven would look like for her and this is the rays of the sun, her friends shining down on her."