Do Voters Care About The Committee’s Effort To Investigate Trump? 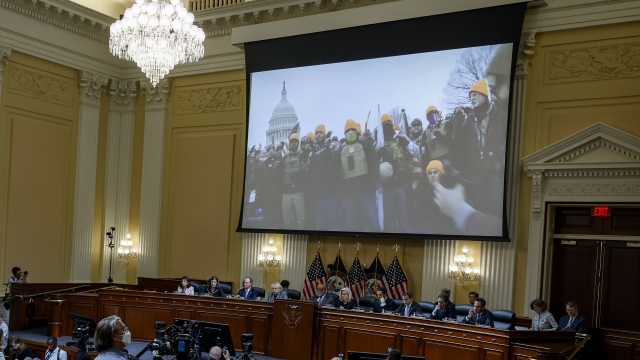 It's no secret that former President Donald Trump looms large in the 2022 midterms, punishing the Republicans who defied him and rewarding his most faithful supporters.

"Obviously we are all very grateful to President Trump," said Harriet Hageman, who is running for election to the U.S. House to represent Wyoming.

But a key question heading into November is whether the former president's many controversies could hurt Republicans in a year that history suggests should be good for them.

"I talk to people in Pennsylvania, where I'm from, I talk to people from Ohio, where I worked for the local congressman for a while, and people just aren't that interested in what's going on, you know, on these partisan run committee hearings, I think, right now, and we hear it again, and again, it's inflation, inflation, inflation," said Christopher Krepich, a former Republican Congressional Communications Director and Communications Strategist.

But a recent NBC News poll found 21% of registered voters said "threats to democracy" are now their top issue, overshadowing concerns about the economy, inflation and immigration.

Additionally, the poll found that 57% say they want investigations into the former president to continue. But this has come at a price for some in the GOP.

Testimony from former aides weaved the timeline together, which was also illustrated by new interviews and never-before-seen photo and video evidence.

Of the 10 House Republicans who voted to impeach Trump, most will not be returning in the 118th Congress next year.

Just two were successful in their primaries against challenges to the Right earlier this year.

The one Republican Senator to vote to convict Trump and face voters in 2022, Lisa Murkowski of Alaska, survived her primary but will still face off against a Trump-backed challenger in the general election.

"I think really what the November elections are going to come down to is how local each candidate is able to make their race. You know, I think of when most candidates are out there on the ground, talking to voters, they're talking about kitchen table issues, they're not necessarily litigating what the former president may or may not have been accused of," said Krepich.

But just a few months out from the 2022 midterms, some Republican Senate candidates are struggling.

Trump endorsed Mehmet Oz in Pennsylvania, Hershel Walker in Georgia and Ron Johnson in Wisconsin — but they are all lagging in recent polls behind their Democratic challengers.

But over in the House of Representatives, Republicans could still be poised to win and are likely to get rid of the January 6th Committee, should they take control of the Chamber next January.