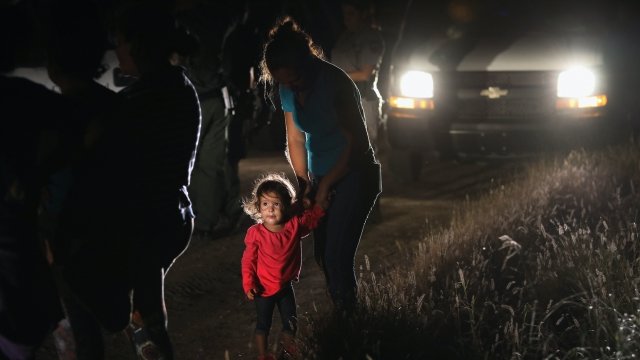 Border Patrol will reportedly stop referring migrants with kids for crimes, but that doesn't necessarily mean they won't be prosecuted.

When migrants cross the border illegally with children, the U.S. Border Patrol will stop referring them for criminal prosecution. That's according to The Washington Post, which spoke with a senior official at U.S. Customs and Border Protection.

The move could thwart a central component of the Trump administration's "zero-tolerance" immigration policy, which says everyone who illegally crosses the border should be criminally prosecuted. Whether to prosecute is up to the Justice Department, and technically it can still do that whether border patrol refers cases or not. But border patrol's referrals are central to the current process. A spokesperson for the DOJ told the Post prosecutions would continue.

For Many Central American Migrants, The US Border Is The Only Hope

Gang violence is prompting many Central American families to make the dangerous trek to the U.S.-Mexico border.

When President Donald Trump signed an executive order Wednesday to largely stop family separations at the border, he said families would predominantly be detained together. But they might not be detained at all if parents or guardians aren't prosecuted.

Of course, the DOJ's head, Jeff Sessions, has been very clear on his position that people who cross the border illegally should be criminally prosecuted, whether they have kids with them or not.