What Exactly Is Storm Surge, And Why Does It Have Floridians Worried? 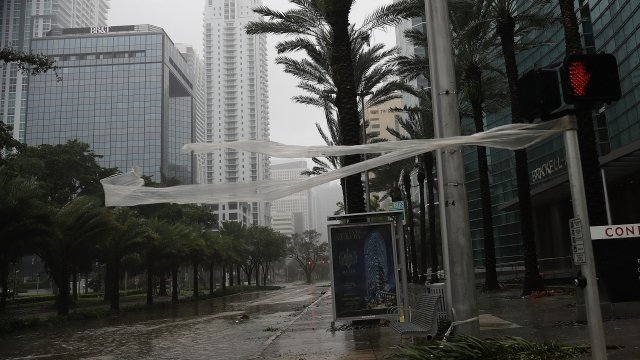 "Six to 12 feet — this will cover your house. If you've ever ... watched how a storm surge works, it flows in fast, very fast, and then it flows out. You will not survive all this storm surge," Scott said at a press conference.

The National Hurricane Center also put out warnings about life-threatening storm surge. But what exactly is it, and why should residents be worried?

To put it simply, it's an unusually high sea level brought on by a hurricane's winds.

Ahead of the storm's arrival, about 6.5 million Florida residents were told to evacuate.

Those winds push waves toward shore, and, because they're pushing water inland so fast, they cause flooding.

Worse yet, more waves can ride on top of the surge. These waves can crash into buildings and cause flooding farther inland.

According to the National Hurricane Center, the surge is part of the storm that poses "the greatest threat to life and property along the coast."

Storm surge can also make the effects of other parts of a hurricane, like heavy rain, worse.

For example, Hurricane Harvey dumped more than 4 feet of rain on some parts of Texas. And at the same time, storm surge elevated Galveston Bay, preventing flood waters from draining.

Ahead of Hurricane Irma, about 6.3 million Floridians have been urged to evacuate.