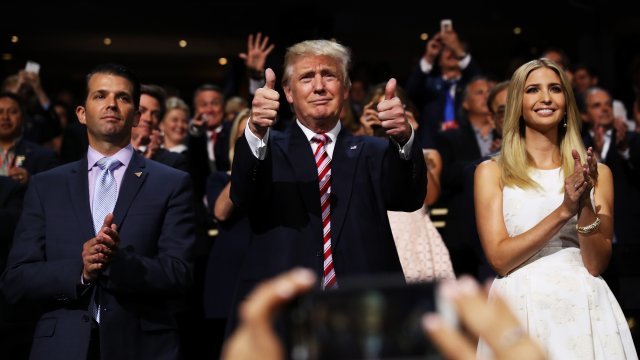 The Trump administration announced "Made in America" week, but it's struggled to control policy messages during its other "themed weeks."

It seems the Trump administration wants to take control of the policy messages coming out of the White House — with some "themed weeks."

Monday kicked off "Made in America" week, where President Donald Trump says he plans to focus on manufacturing and domestically made products.

But there were some road bumps before it even started. Trump and his daughter Ivanka have been criticized for making most of their products abroad. A recent Washington Post investigation revealed that Ivanka's company outsources production to factories in Bangladesh, Indonesia and China.

A White House official wouldn't say if the president would encourage his daughter to make her products in the U.S.

Trump's previous themed weeks have also been overshadowed by other headlines, like the London bridge terror attack and former FBI director James Comey's testimony before the Senate intelligence committee.

Some moderate Republicans aren't OK with revisions to the Senate's health care bill because of prospective cuts to Medicaid.

During "infrastructure week" in early June, Trump proposed a new budget to improve the country’s infrastructure as well as a plan to privatize the nation's air traffic control. But the week was also dominated by news of Comey's hearing as well as the president’s tweets criticizing London Mayor Sadiq Khan after a terror attack in the city.

Two weeks after that, Trump's "tech week" summit with his son-in-law Jared Kushner led to a meeting with Silicon Valley's top executives, where they discussed modernizing federal government technology. However, many execs at the tech summit focused on Trump's travel ban and the Paris Agreement.

The White House says it has plans for other themed weeks, including "American Heroes" week and "American Dreams" week.