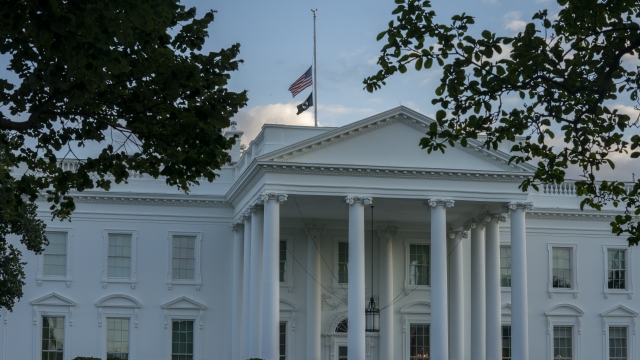 President Biden expressed gratitude for the queen's consistency with the 14 U.S. presidents throughout her 70-year reign.

There's a storied history between Queen Elizabeth II and U.S. presidents that reflects a deep bond between the two countries.

Over her 70-year reign, she met with 13 of 14 sitting presidents — with Lyndon Johnson being the exception.

"Queen Elizabeth II was a stateswoman of unmatched dignity and constancy who deepened the bedrock alliance between the United Kingdom and the United States. She helped make our relationship special," President Joe Biden said in a statement after her passing.

Her official visits to the U.S. go back to 1951, when then-Princess Elizabeth was greeted by President Harry Truman in Washington.

"I think your visit will improve, if that's possible, the cultural relations which exist between our two great countries," he said.

"Mr. President, the British and American people are as close today as two peoples have ever been," the queen stated.

"Administrations in your country and governments in mine may come and go but talk we will, listen we have to, disagree from time to time we may, but united we must always remain," the queen stated during a toast.

Through the years, the queen was the constant.

"Queen Elizabeth really represents to our country the manifestation of the special relationship between the U.S. and Great Britain and for seven decades she has been the embodiment of that friendship," said Anita McBride, former chief of staff to first lady Laura Bush and former assistant to George W. Bush, and a staff member in the George H.W. Bush administration. "The relationship I think she had with each of our presidents was one of great admiration and respect on their part, vis-a-vis her."

McBride said of the relationship between the queen and the Bushes: "I think there was a long friendship, a bond that was very special."

She recalled the care and attention that went into making the White House shine, and the excitement in the months of planning the visit with all hands on deck, down to coordinating colors of dresses.

"I think the other thing I remember about Queen Elizabeth's visit in 2007 that was really meaningful to the Bushes was Queen Elizabeth and President George H.W. Bush visited the World War II memorial together," said McBride. "Here are these two world leaders; of course, she was still a sitting world leader, he was a former, but who so much of their life, you know, was formed by that incredible pivotal, historical, dramatic event in world history."

She said Laura Bush had a great respect for the queen, noting in private moments they had a sense of humor and laughed over their dogs. The 2007 visit was timed with the Kentucky Derby, which the queen attended. Laura Bush invited the winning jockey to White House for the state dinner, as the queen was an avid horse rider.

"What I particularly am grateful for, too, was Queen Elizabeth and Prince Philip were very gracious to those of us on the staff of the White House who really had been deeply involved in the planning of her visit. And she invited us to come over to Blair House, so she could say thank you to us. And I felt it was my time to say thank you to her for what she meant, what she represented the great respect I had for her and, and really the privilege that it was to work on her visit. So I'll always be grateful for that," McBride said.

Over the years, Queen Elizabeth also welcomed U.S. Presidents to Great Britain, including the Nixons, Reagans, Kennedys, Clintons, Obamas, Trumps and President Biden, and met presidents in other locations — George H.W. Bush at a Baltimore Orioles game and the Reagans at their ranch in California.

"They, I think, in some ways were the closest relationship of a president and the Queen of England," said Barbara Perry, the presidential studies director at the University of Virginia Miller Center, about the Reagans and the queen. "She asked if she could come visit them there because she wanted to go horseback riding with President Reagan as they had done at Windsor."

Perry said each president seemed to find their own relationship with the queen.

"I really do think it went from this father-daughter relationship to a, perhaps, a son-and-mother or son-and-grandmother relationship, and that each president seemed to find sort of a special link with her and vice versa," Perry said.

But it reflected a significant and important relationship for the countries.

"Well, for example, in the case of the Reagan administration, particularly important as the cold war comes to its height, and ends then with the vice president under Reagan, when he becomes president Bush 41 was the fall of the Berlin Wall and the end of the Soviet Union," Perry said. "But again, to maintain that Atlantic Alliance that is embodied in NATO, the North Atlantic Treaty Organization, that had been conceived by FDR and Winston Churchill, who was the first prime minister that that the queen served with, was really important to keep that alliance going particularly at the height and peak of the Cold War."

Following Queen Elizabeth's death, President Biden ordered flags to fly at half staff and visited the British embassy in Washington, D.C., where people had placed flowers outside.

"Her Majesty Queen Elizabeth II was more than a monarch. She defined an era," the president said in a statement.

"Her dignity, graciousness, and sense of duty have been an inspiration," former President Jimmy Carter stated.

Why does the U.K. still have a monarchy?

"Throughout her remarkable 70-year reign, she led Britain through great transformations with unfailing grace, dignity, and genuine care for the welfare of all its people.  In sunshine or storm, she was a source of stability, serenity, and strength," former President Bill Clinton stated.

"Queen Elizabeth ably led England through dark moments with her confidence in her people and her vision for a brighter tomorrow. Our world benefited from her steady resolve, and we are grateful for her decades of service as sovereign. Americans in particular appreciate her strong and steadfast friendship," stated former President George W. Bush.

"Back when we were just beginning to navigate life as President and First Lady, she welcomed us to the world stage with open arms and extraordinary generosity. Time and again, we were struck by her warmth, the way she put people at ease, and how she brought her considerable humor and charm to moments of great pomp and circumstance," former President Barack Obama and first lady Michelle Obama stated.

"Her leadership and enduring diplomacy secured and advanced alliances with the United States and countries around the world. However, she will always be remembered for her faithfulness to her country and her unwavering devotion to her fellow countrymen and women," stated former President Donald Trump and first lady Melania Trump.