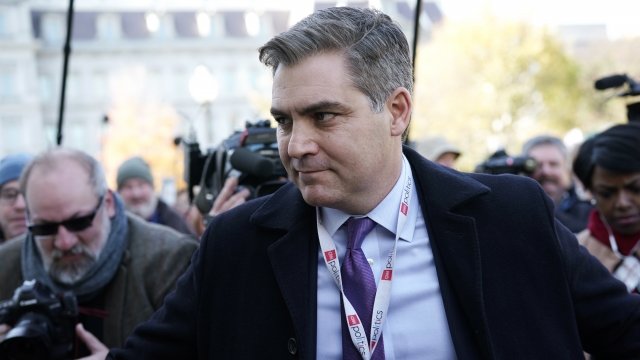 ​The White House also outlined a set of rules for journalists to follow.

The White House said Monday that CNN correspondent Jim Acosta will be allowed to attend its press briefings again — so long as he follows a new set of rules for reporters.

The rules mandate that journalists only ask one question at a time and say it's up to the president or White House officials to allow follow-up questions. It also added that journalists need to "physically [surrender] the microphone to White House staff" when they're finished speaking.

Failure to follow the new set of rules will result in either "a suspension or revocation of the journalist's hard pass."

The news came after CNN and Acosta asked for an emergency hearing on their motion to stop the Trump administration from revoking Acosta's credentials until the litigation was over with. But now that Acosta's press pass has been reinstated, CNN has decided to drop its lawsuit.

The White House suspended Acosta's press pass earlier this month after he and President Donald Trump had a heated exchange during a press conference. In response, CNN filed a lawsuit against Trump and several members of his staff, saying the administration violated Acosta's First and Fifth Amendment rights.