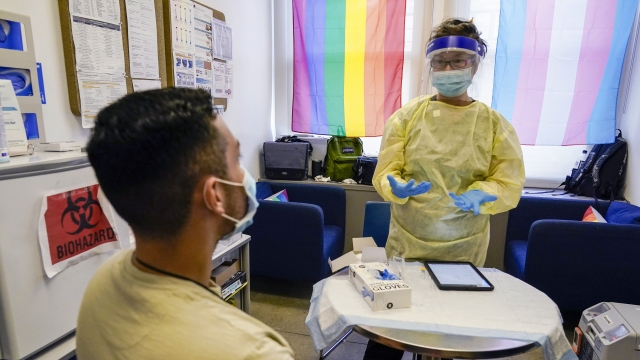 It comes as Texas health officials confirm the first U.S. monkeypox death. They say an adult patient in the Houston area also was severely immunocompromised. An autopsy is expected in the next few weeks.

Anyone can get monkeypox. The World Health Organization and the CDC say gay, bisexual and other men who have sex with men make up the majority of the cases.

In the U.S., cases are slowly trending down compared to July.

The WHO say the Americas accounted for 60% of global monkeypox cases in the past month.

"There are encouraging early signs, as evidenced in France, Germany, Portugal, Spain, the United Kingdom and other countries that the outbreak may be slowing," said Hans Kluge, WHO Europe regional director.

Federal officials are cautiously optimistic, but challenges remain, like getting vaccines equally distributed. About 10% of monkeypox vaccine doses have been given to Black people. They account for one-third of U.S. cases, according to the CDC.

The FDA also recently green lit a different method for giving the JYNNEOS shot: underneath the skin, but not as deep in the muscle. Federal officials say that should help get two doses of the vaccine to the 1.6 million people in the U.S. who are most at risk of contracting the virus.