How Americans Came To Expect Election Results On Election Night 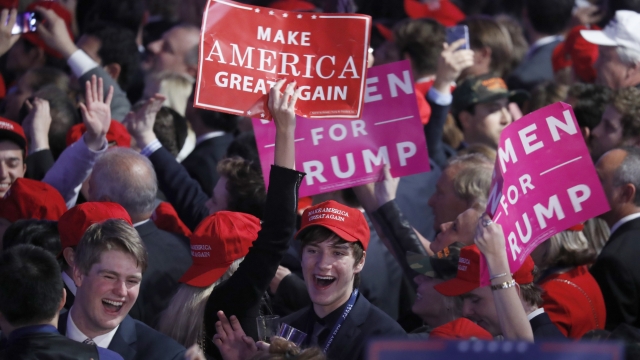 Just four times in America's history has the country had to wait past the Wednesday after Election Day to find out who won the White House.

Americans have come to expect election results on election night thanks to more than a century of precedent.

"Starting, really, after the Civil War, we get this expectation that we can learn the result on election night because usually it's not too close and you can do that," said Edward Foley.

Edward Foley is the director of the election law program at the Ohio State University Moritz College of Law. He said the invention of the telegraph is what really started allowing newspaper editors to declare winners in the Wednesday morning headlines. When the television rolled around, election night became appointment TV.

"It was partly entertainment, and it was partly civics. And somebody like a Walter Cronkite was a trusted figure. And so if he told you who won, you thought you should know ... that was an answer you could trust," said Foley.

Democrats Have An Edge In The 2020 Race For Congress

With the election about 100 days out, the Cook Political Report ranks six seats as tossups, and all of them are currently held by Republicans.

The 1876 election is the one of the most disputed in history. The results were ultimately settled by a commission just two days before the inauguration of Rutherford B. Hayes.

In 1884 and 1916, concerns of voter fraud delayed the results for two weeks as lawyers validated ballots. Ultimately, Grover Cleveland and Woodrow Wilson won those elections, respectively.

And 2000 brought the now-infamous race between George W. Bush and Al Gore — the then-vice president didn't concede until Dec. 13 after the Supreme Court put a stop to the ongoing recounts in Florida.

"Bush vs. Gore in 2000 taught us there's essentially five weeks between Election Day and a deadline in terms of the Electoral College that is important. ... If you freeze the count at the end of five weeks, do you have the right result or not? Depends on how fast the state is able to do its recounts and its review of its procedures," said Foley.

Now, with more Americans than ever poised to take advantage of mail-in voting, experts say the 2020 election could be the next example.

History Shows The Debate Stage Can Make Or Break A Campaign

Televised debates are a mainstay of modern presidential campaigns in the U.S., but their history is relatively short.

Major media outlets often get their election results filtered through a company like Edison Research. It operates the National Election Pool that news organizations use to call who wins and loses races. After watching results slowly trickle in for a number of 2020 primaries, Edison co-founder and executive vice president Joe Lenski said they're preparing for a marathon, not a sprint.

"We're going to have to have teams available to report votes on Wednesday, on Thursday, on the Tuesday after the election. And this process of reporting votes as they come in and making the projections on who's won is just going to take a much longer period of time this November," said Lenski.

Any results we do get on Nov. 3 will be preliminary, since election winners aren't official until states complete their election canvass. Lenski and Foley say patience will be key.

"We're taking the process seriously, that we're getting the information as fast as we can. And we're doing our best about reporting as quickly as we get it, but putting it in a context of what it means in terms of how much vote has been counted and how much is remaining and how the vote could change based on that," said Lenski.

"We don't want a faster result that is a false result. So if it requires an extra two weeks to get a true, accurate result, it's worth it," said Foley.