Why Are Factory Jobs Making A Comeback? 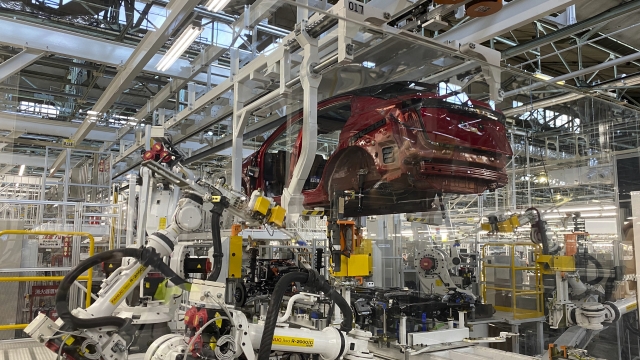 The economy is changing and manufacturing jobs are on the rise.

1939 was the dawn of a golden age in American manufacturing. Product output was high and jobs were plentiful with steady, cyclical industry growth amassing nearly 20 million manufacturing jobs by 1979.

Dr. Robert Forrant is a distinguished university professor of history, who specializes in labor studies at the University of Massachusetts-Lowell and knows firsthand the ups and downs of manufacturing. He was a factory machinist in the 1980s.

"So at the end of the second World War we become the major supplier of steel, of appliances, of everything that rebuilds Europe and rebuilds Japan, and rebuilds Asia and other parts of the global economy," said Forrant.

At the time, Forrant says companies realized they could make more money by offshoring operations.

But you know the saying — more money, more problems.

"We’re exporting the know-how, we’re creating the possibilities for these other places, and West Germany and Japan, Britain and France are all gonna rebuild as quickly as they can their manufacturing because they don't like the drain of all their money coming to the United States," Forrant said.

With not enough people available to fill jobs, businesses are having to offer higher pay to attract and keep workers.

Offshoring kicked off 40 years of job loss in manufacturing — notably in durable goods like machinery, fabricated metals and computer and electrical products. Pundits and analysts say automation and labor costs are to blame, but Forrant says the export of knowledge and the flick of a pen in 1993 led to industry-wide job losses.

"The gains from this agreement will be your gains too. It means greater productivity, lower unemployment, greater worker efficiency, and higher wages and greater security for our people," said former President Bill Clinton.

The North American Free Trade Agreement was signed Dec. 8, 1993, creating the world’s largest free trade zone at the time between the U.S., Mexico and Canada.

"It makes it easier and more lucrative for American-based corporations to put their facilities over the border in Mexico," Forrant said.

The Economic Policy Institute says nearly 900,000 jobs were lost since the signing of NAFTA through 2002. Most of the jobs lost were in high-wage manufacturing, a majority disappearing within the rust belt.

Twenty years later, the demand for manufacturing is on the rise with nearly 13 million workers in those states — the largest number the industry has seen in about 12 years. So why the increase?

"There was a realization that having manufacturing done closer to [where] innovation was being done created a better working relationship and got things done more quickly," said Forrant.

But today’s manufacturing jobs are different than those during the original manufacturing boom. They require more training, setting the stage for a shortage in workers.

It’s a hurdle some companies need to clear, as they work to rebuild their infrastructure on American soil, in a manufacturing marathon where it’s unclear if new jobs are here to stay.