Why Are There So Many Ways To Spell Hanukkah? 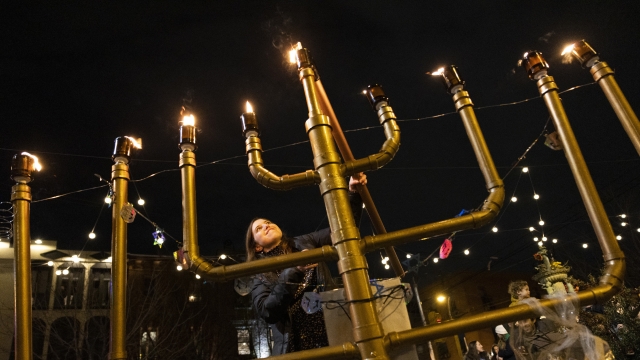 The historical Oxford English Dictionary lists 24 variations for the eight-day holiday. It can lead to some confusion when it comes to spelling.

Hanukkah celebrates the re-dedication of the second temple in ancient Jerusalem and the miracle of a tiny amount of oil lasting for eight days. It is the Jewish festival of lights. But whether you celebrate it or not, when it comes to its spelling you might be in the dark: there’s Hanukkah, Chanukah and Hanukah. In fact, the historical Oxford English Dictionary lists 24 variations for the eight-day holiday. So why the confusion when it comes to its spelling?

And its that first letter that causes most of the kvetching.

There’s no precise English letter that matches the guttural sound the "het" produces as Barbara Streisand tried to explain in "Meet the Fockers."

According to the Oxford English Dictionary that "cha" sound was transliterated as "c-h" back in the 1600s.

But that’s confusing because it’s a different sound than c-h would produce in English as in "cheetah or Charles."

Later, Hanukkah was transliterated to start with an 'H' but that’s also not quite the perfect parallel.

The middle letter "kaf" also sparks debate because it can be transliterated as a 'c' or a 'k.'

That means today, along with the traditions of lighting candles, playing dreidel and eating latkes you can also participate in the tradition of trying to figure out how to spell Hanukkah.

Any agreement on that might be the greatest Hanukkah miracle of all.

The treat has evolved from chewy chocolate to consumer-conscious, meticulously crafted, melt-in-your-mouth money.