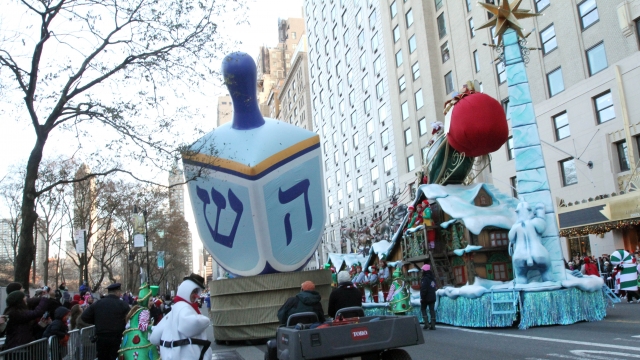 Starting December 18 Jewish people around the world celebrate Hanukkah by singing songs, lighting candles, eating latkes and playing dreidel. But why do we play with this little top during the holiday? It goes back to the second century when the Greek empire ruled over Israel.

Back then it was a distraction device. Today it's a top with four sides and a Hebrew letter on each. The letters are nun (נ), gimel (ג), hey (ה), and shin (ש). And it stands for "nes gadol ha-ya sham" or "a great miracle happened there."

"We celebrate two possible miracles during Hanukkah. The one miracle that seems potentially more historically accurate is that a small army of Israelites defeated a large army of Greeks. Or potentially the miracle that the oil that was found when the temple was rededicated after that battle should have only lasted for one day. It lasted for eight days," Goldmarche said.

Today children play dreidel and can wager chocolate gelt or other small items. Each letter corresponds with an outcome. If you get nun you get nothing — if you get hey you take half the pot. A shin means you put a piece into the pot. And if you land on gimel — you get the whole pot.

Why Are There So Many Ways To Spell Hanukkah?

The historical Oxford English Dictionary lists 24 variations for the eight-day holiday. It can lead to some confusion when it comes to spelling.