Why Does Intergenerational Trauma Affect Us? 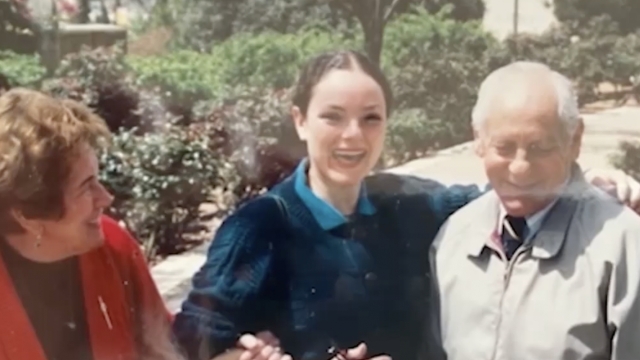 Psychologists say that although we pass down heirlooms from generation to generation, we can also pass down trauma from past events.

We can't change the past, but the past can change us for generations.

"To realize the capability of humanity to turn into the most vicious creatures on this Earth; We have that built in to us," said Bill Kugelman, a Holocaust survivor.

Kugeleman is 98-years old, but he vividly remembers life as a teenager in Poland when Nazis tore him from his home and condemned him to the concentration camps. He used to smoke dried leaves to tame ravaging hunger and grew numb from the beatings and the fear. He believed he'd never see freedom again.

"You just did not react to things anymore. It's just like you beat the dead horse. That was it," said Kugelman.

He says even 80 years later, he can't bring himself to give a full description of life and death in the concentration camps.

And to those closest to that kind of pain, it's their history, too — even if they didn't live it.

Dr. Irit Felsen is a psychologist who specializes in holocaust-related trauma and knows this subject on a deeper level.

"Children of trauma survivors have an experiential knowledge of their parents trauma of experiences that they never actually lived through," said Felsen.

Both her parents were survivors, making her a 2G or 2nd generation survivor. She says children of survivors can react to their parent's anxiety and depression.

"Being hyper vigilant about all kinds of things all the time, be a little suspicious; mistrustful illness, anxiety and a tendency to sort of depressive experiences," said Felsen.

How The Aftermath Of Natural Disasters Affects Mental Health

Research has shown suicide rates rise by 23% after natural disasters. Depression and anxiety also go up months after the storm.

This is called "intergenerational trauma" which means a survivor was impacted so greatly. Their descendants also grapple with the effects of a traumatizing event.

According to the American Psychological Association, people who experience intergenerational trauma may show emotional or behavioral patterns similar to the survivor, such as: shame, increased anxiety, guilt, low self-esteem, and depression.

Even substance abuse and difficulty creating relationships with others and so much more. While intergenerational trauma was first identified among children of holocaust survivors – it isn't specific to one culture.

Take Brought Plenty, an indigenous woman and boarding school survivor who says she remembers the moments federal U.S. officials forcibly took her from her grandparents and sent her to a boarding school designed to erase her language, culture and beliefs.  "She just grabbed my hair on one side, my braids, and just cut it off and threw it right at me and then went to the other side and cut it off," said Plenty.

She was just six-and-a-half years old and never saw her grandparents again.

Now, at 70, Plenty recalls how she was forced to forget her name, bathed in soap that smelled like lye, and suffered physical abuse at the hands of other students and staff.

She says her daughter Nellia Faradi now bears the consequences of that trauma.

"I can honestly say with my older children, I never hugged. I never kissed them. You know, I never told them I was proud of them," said Plenty.

Psychologist Fabiana Franco is among a chorus of researchers who say difficulty expressing love or emotions can affect a child's sense of self-worth, which they then pass on to their own children later in life.

Nellia's trauma manifests as guilt as she helps her mother find missing children who never came home from boarding school.

"I have a breakdown at least once a month because, you know, I'm reading all of these testimonies and then I feel bad because I'm like, well, I should be able to read this if other people live through it. But at the same time, it's like, you know, you can't carry hundreds of people's stories," said Faradi.

While researchers have widely documented the effects of intergenerational trauma, there's no conclusive finding about how it's passed on.

Where Is Mental Health Funding Going?

Tackling the mental health crisis from a political standpoint often comes down to one thing —funding. So where is the money going?

Researcher Yael Danieli believes survivors may struggle to form healthy bonds and emotional attachments to their children, which can create a cycle of avoidant and distrustful relationships. But one 2015 study by Dr. Rachel Yehuda at Mount Sinai hospital found genetic changes to Holocaust survivors' descendants specifically focused on the gene associated with stress hormones.

This theory is known as "epigenetic inheritance" the thought that environmental factors, like stress or diet, can affect your descendant's gene expression.

"Hundreds of years of trauma no treatment, freed, no treatment. Do you think there may be residual impacts of that trauma? Of course there is. It didn't end friends, and it hasn't ended yet," said DeGruy.

She says there is also a sense of a foreshortened future, internalized racism, difficulty sleeping and angry outbursts.

DeGruy argues trauma responses are so prevalent. Others wrongly believe it's inherently part of the Black experience.

"That's their culture. That's just the way they are. So there's poison in the cookies right but how are you going to tease out that poison," said DeGruy.

To cut the intergenerational chain of trauma, therapists recommend being open about the extent of past issues and discussing the impact with loved ones. There are also different areas of professional help. Narrative exposure therapy helps patients re-frame traumatic experiences to relinquish the control it play in their lives. And the Intergenerational Trauma Treatment model focuses on healing unresolved childhood trauma through different cognitive behavioral techniques.

But for Neilla and Brought Plenty, they're re-building trust and closeness through bringing justice to the indigenous children who never made it home.

"I know for myself that I have to step back in a way, as painful as it seems to me. I want my daughter to live a good life," said Plenty.