Why Does Swiss Cheese Have Holes In It? 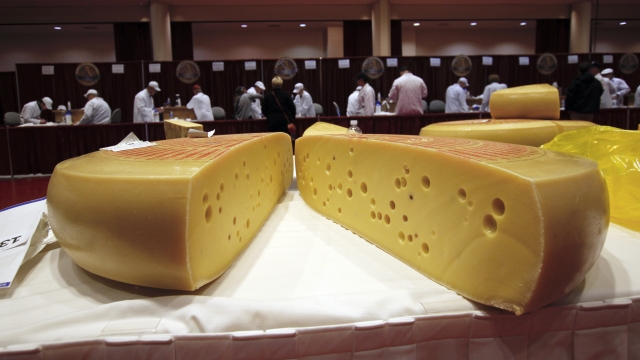 Swiss cheese used to be turned down by cheesemakers, but now those holes you see have become a distinct feature in the cheese.

I mean, when you have cheese, it's the sign you're having a "gouda" day and you could "disa-brie" ... I mean, disagree.

But everything is always "cheddar" — excuse me — better, with cheese.

When it comes to Swiss cheese, it feels like something is missing.

Why does it have holes?

First off, the cheese experts actually call those holes "eyes."

Why Do We Have An Appendix?

Many people wonder if your appendix is a vital organ that you need in your body.

And they're caused by carbon dioxide bubbles that form in the cheese.

Time to put on our scientist cap and put Swiss cheese under the microscope.

Bacterial culture called "propionibacterium"— or "props" for short, are behind the eyes.

This bacteria is in hay, grass and soil and ends up in milk from cows.

That milk makes its way to a cheese factory where it's standardized, pasteurized, and brined.

After that, the cheese sits in a warm room which helps the props form those carbon dioxide bubbles.

Those bubbles are left alone while the cheese ferments, resulting in its eyes.

The holes used to be seen as a deformity, and cheesemakers tried to get rid of them.

But today, they're a distinct part of Swiss cheese.

In fact, the cheese industry even pays the government to rate its cheese.

Grade-A Swiss cheese has eyes that are between three-eights of an inch and thirteen-sixteenths of an inch in diameter.

And with more than 300 million pounds of Swiss cheese produced annually in the U.S. — that's a lot of eyes.