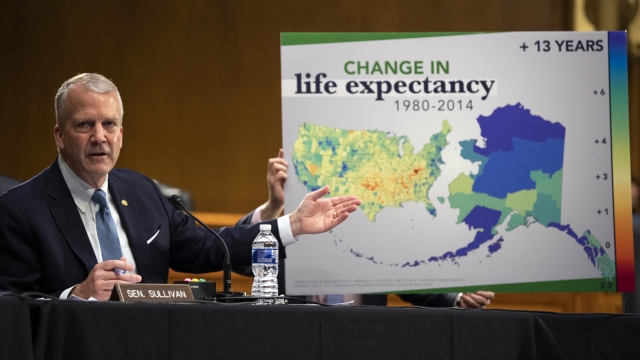 Life expectancy is a key metric used to determine the heath of a country. The World Bank says it's improving around the world.

How long will you live? It could be an inspiring or scary question.

But to a demographer It’s neither. It’s a key metric that says a lot about the health of a country.

In 1960 the average American’s life expectancy was almost 70 years old, according to the World Bank.

Today the nation has made progress, with an average life expectancy of 77.

Why have other countries surged ahead? And how could the U.S. improve?

To answer these questions we're focusing on three countries: the U.S., the richest country in the world, according to the World Bank; Japan, the third richest; and Chile, ranked 43rd.

We spoke to Joseph Chamie. He’s the former director of the United Nations Population Division.

During the post-war boom, Americans benefited from medical advances, like penicillin and open heart surgery.

U.S. Life Expectancy Plunged Again In 2021, Down Nearly A Year

U.S. life expectancy rose for decades, but progress stalled before the pandemic and then declined during the pandemic.

Japanese men had a life expectancy of 24 during the war, thanks in part to combat and food shortages.

"Japan's life expectancy was lower than the U.S. in the early fifties. Of course they have to rebuild their societies," said Chamie.

Japanese life expectancy shot up 14 years between 1947 and 1955, according to government data.

"In the case of Chile, it was even more remarkable," Chamie said.

The government covered half of everyone’s medical costs.

"But there are many factors in Japan that were contributing to a lower mortality. One of them, of course, was diet and obesity. Eating more fish and more vegetables than the American diet," Chamie said.

Americans lived longer as the 20th century progressed, but we also developed some unhealthy habits.

"In the U.S., many people are lacking health care systems in place, so they are not taking preventive action early enough to deal with illnesses. Especially the last 20, 30 years, drug addiction, opioids have become an epidemic level proportion. Obesity has also gotten much higher," said Chamie.

"Chile and Japan, they're providing health care systems, and also supporting people so they feel integrated in society," Chamie said. "They did some comparisons of Japanese who went to Hawaii and California. And you find that they changed their diet, increased obesity and also lower life expectancy because of that diet change."

"We're spending a great deal of money on our health care and doing not as well as many other countries, including China, Japan and Chile," he continued. "Individual responsibility is certainly one area. Second, providing health care systems and adequate services to assist people so that they will live to old age."

So many factors determine how long we’ll live. But Chamie says learning from other countries’ successes might help us improve longevity here at home.