Why Is It So Difficult To Bring Detained Americans Home? 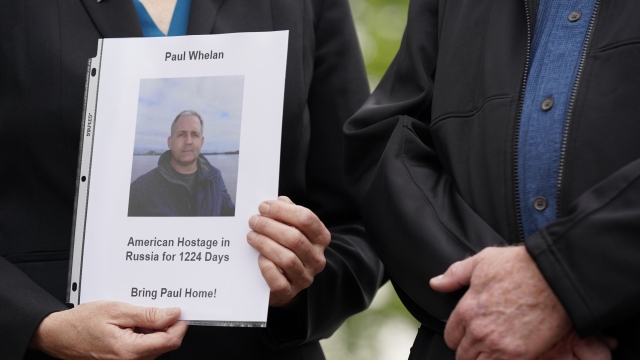 There are over 50 Americans that are wrongfully detained in several countries, and many wonder why is it hard to negotiate their release.

If you ask American diplomats and military leaders, Trevor Reed never should have been in that nightmare, wasting away in a Russian prison.

"Every day that I was in prison there, I never fully was able to accept that that was real. You kind of wake up and you're like, maybe this is a nightmare. Maybe I'm not, you know, like a political prisoner here. Maybe this didn't happen," said Reed.

In 2020, a Russian court sentenced Reed to nine years in prison.

Reed's interview with our sister station in Waco, Texas, was only possible because the Biden administration agreed to a prisoner swap in April.

It sent a Russian pilot convicted of drug smuggling to Moscow in exchange for bringing Reed home.

It is unclear what the deal is, or whether it will be enough for Russia to release the Americans.

KXXV REPORTER TODD UNGER: You're about to cross that tarmac. And you're thinking what?

TREVOR REED: I just thought the whole thing was like extremely surreal.

But Reed's story is the exception. He is one of the few Americans recently detained overseas who made it back to their families.

The James W. Foley Legacy Foundation says at least 67 U.S. citizens are detained overseas, and 9 out of 10 of them are wrongly detained.

Diane Foley is the organization's founder. She named it after her son James Foley who went missing in November of 2012 while reporting in Syria. Nearly two years later, ISIS posted a video online showing his murder. Foley was one of what his mother calls "bargaining chips" for foreign powers.

"We fear that the 67 public cases are a tip of the iceberg, if you will. We suspect is hundreds more," said Foley. "Often they want various concessions that we don't want to give. The whole process of negotiation is the part that's essential. I think too often in the past, because this is not pleasant or difficult or easy. It's been avoided, frankly."

The Foley Foundation advocates for hostages and journalist safety.

"They usually have an agenda and they often will hold us hostage as the government," said Foley.

The arrest and sentencing of women's basketball superstar Brittney Griner thrust the issue back into international headlines.

The U.S. State Department is escalating its efforts to bring Griner home and considers her "wrongfully detained."

Advocates like Foley believe the calls for urgency in these situations are good — but it can also up the ante for the captors.

"The publicity helps our administration to recognize and do what it must do, to negotiate and bring them home. But the downside is it can increase the value of that particular person who's been detained. And that's always a risk," said Price.

The White House is weighing a prisoner swap to bring Griner and another wrongfully imprisoned American, Paul Whelan, back to the U.S.

Political experts and opinion columnists have said such a move could set a dangerous precedent. It would give foreign adversaries a motivation to detain Americans on trumped up charges again.

Others like Trevor Reed say a swap may be necessary.

"The Russians took Paul Whelan, and immediately asked for a prisoner exchange. The U.S. said 'oh no, they could extort the United States' and if that's your argument would be they didn't take more Americans hostage, but they did. After that, they took me," said Reed.

The WNBA star was detained in February at a Moscow airport when authorities reportedly found vape cartridges containing oil derived from cannabis.

Russian police arrested Whelan, a former Marine, in 2018 and accused him of espionage.

Whelan's family disputes the charges and says he's being held as leverage in a geopolitical dispute.

"It is going to be an ongoing problem for Americans traveling around the world. Not just in Russia and not just with Paul's case. And the delays that the U.S. government suffers when they decide who to handle it just makes it worse for the particular family involved," said David Whelan, Paul's brother.

Griner's and Whelan's cases are in the hands of a State Department Office President Obama set up in 2015 to negotiate releases for hostages and wrongfully detained Americans.

It's called the Special Presidential Envoy for Hostage Affairs.

"There was really, you know, a lot of pressure on the Obama administration to find out why what are we doing with hostage families," said Foley.

In July, President Joe Biden signed an executive order to increase the consequences for people tied to wrongful detainment.

The move builds on the 2020 Robert Levinson Hostage Recovery and Hostage Accountability Act which made permanent that State Department Office President Obama set up.

The law's namesake was a retired FBI agent who disappeared in Iran in 2007.

His family says he died in Iranian custody as the longest-held hostage in American history.

President Biden's order will now allow officials to sanction and place entry restrictions on those it believes wrongfully detained Americans.

The State Department is also adding a "D" indicator on travel advisories to show the risk of detention in a country.

Families, like Trevor Reed's and James Foley's, say the government needs to be more transparent with families when their loved one is imprisoned abroad.

"I would hope that it could become evermore a priority and have more assets applied to bringing people home, as opposed to needing to pick up the pieces after horrific executions," said Foley.

Trevor Reed says he's grateful for the Biden administration's work. But he believes the White House can do more to help Griner, Whelan and the dozens of others held abroad against their will.

UNGER: What is your message to them?

REED: You know, my message to them is, do whatever you have to do there to survive. And if you have hope, then then don't give that up.