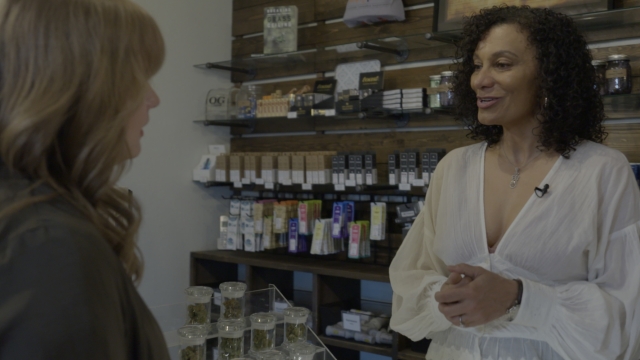 America's War on marijuana seems to be coming to a close as more and more states legalize weed, but the people who suffered most from tough drug laws may now be facing a different type of discrimination.

Minorities have largely been left out of the business of selling marijuana -- a booming industry that made an estimated $10.4 billion last year.

Wanda James is a rare success story for black people in the cannabis industry. She and her husband opened Simply Pure, a dispensary, cultivation facility and marijuana edible company in Denver, Colorado.

They are the first African-Americans legally licensed to own a cannabis company in the U.S.

James says its important to have more diversity in marijuana businesses because "the cannabis industry has been bought and paid for on the backs of people of color."

And though there are no official statistics on the racial makeup of the cannabis industry, one study found that only 19 percent of marijuana business owners identify as minorities. Less than five percent were African-American. Another analysis found that less than 1 percent of dispensaries in the U.S. were owned by black Americans.

And while white Americans and people of color consume marijuana at the same rate, studies show that blacks and Latinos have been arrested and incarcerated at least four times more than whites for the possession and sale of weed.

"We wanted to put a black face on cannabis. I found out that my brother was arrested at age 17 or 18. For four ounces of cannabis that cost him ten years of his life in the prison system and four of those years he spent picking cotton in a maximum security prison to purchase his freedom," James said.

James' award-winning cannabis, which they grow in small-batches, is considered some of the best in Denver. But she says her success didn't come easy. The biggest challenge? Not getting arrested.

"I mean we were actually raided and at one point we got a call from the sheriff's department telling us that they were in the process of raiding our facility," James said. "We did not know if we were going to be arrested day in and day out."

And it wasn't cheap. James says opening the Simply Pure dispensary cost her and her husband, who own several businesses around Denver, about one million dollars.

"It is damn near impossible for a person of color to get started in this business," James said. "We're finding out that the licensing process is extremely flawed in every state which is at a detriment to black owned Latino owned women and vets. And then you add in the idea of the amount of millions that you need to be able to enter into a into a market right now and most people of color can't call their mom and dad and say Hey Mom Dad I need five million dollars."

Cost and access are the biggest hurdles facing minorities looking to enter the cannabis industry. A license to sell marijuana can go for tens of thousands of dollars in places like New York and California. And the process for granting them has been called discriminatory. In some states you can't get a license if you've got a conviction, even for marijuana.

And that's just the first step. The industry faces a host of other unique financial challenges because marijuana is still federally illegal.

Why Tax Day Is So Much Harder For Marijuana Businesses

Paying federal taxes can be a pain for any business, but federal restrictions on marijuana make it much harder for cannabis businesses.

James says the best way to even the playing field is for states and the federal government to figure out a way to help people of color secure funding for their businesses.

Congress has one solution in the works. A bill making its way through both the House and Senate would allow banks to work with legal cannabis businesses, so entrepreneurs could open accounts and get loans to pay for licensing fees and cover other costs.

Most banks won't work with legal weed businesses as long as marijuana is still federally illegal. Congress could soon fix that.

The bill has strong bipartisan support, but it's unclear how it will fare in the GOP-controlled Senate.

For now, James says cannabis companies should put more effort into integrating their businesses at every level, from the C-suite down to the budtenders.

And for people of color who want to get into the industry, James' advice is to find a way to use the talents you already have.

"Bloom where you're planted," she said. "The best way to get into this industry is do what you do. So if you're a real attorney I guess this industry needs people that can find spaces for real estate places or dispensaries and office spaces a cultivation. If you're a designer guess what we need somebody to design all of this amazing packaging and point of sale information."