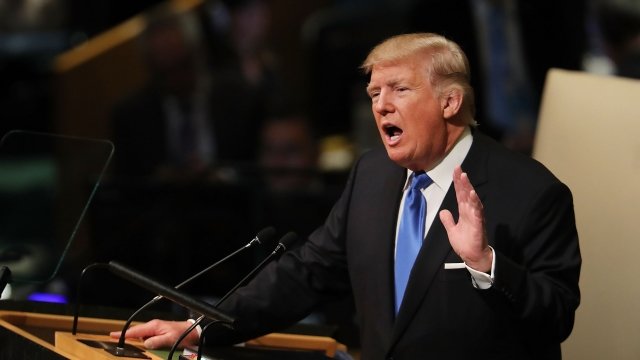 Twitter says it won't take down one of President Donald Trump's tweets that appears to threaten North Korea.

Trump tweeted Saturday: "Just heard Foreign Minister of North Korea speak at U.N. If he echoes thoughts of Little Rocket Man, they won't be around much longer!"

North Korea may have taken Trump's tweet as a declaration of war. On Monday, the country's foreign minister said, "We will have every right to make countermeasures." Twitter users questioned why Trump's tweet wasn't taken down.

Twitter's policy states users can't make "threats of violence or promote violence, including threatening or promoting terrorism," or their account could be suspended.

On Monday, the social media site said Trump's tweet will stay up because of its "newsworthiness."

Twitter said it has an internal policy to keep newsworthy tweets up and that it will update its public rules to show that.

The White House called North Korea's war suggestion "absurd" and said the U.S. would still try for peaceful denuclearization of the peninsula.