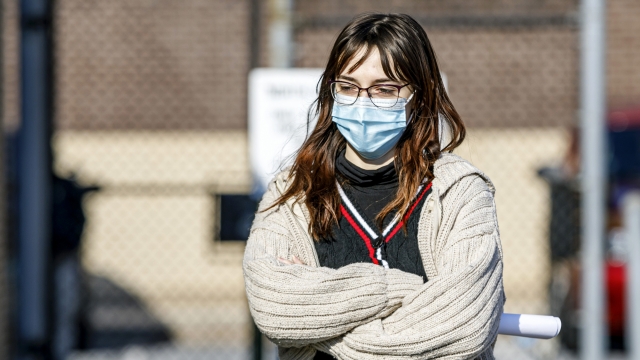 Riley June Williams was found guilty of six federal counts, including civil disorder, but the jury was deadlocked on two other charges.

A Pennsylvania woman linked to the far-right “Groyper” extremist movement was convicted Monday of several federal charges after prosecutors said she was part of a group that stormed House Speaker Nancy Pelosi's office during the Jan. 6, 2021, attack on the U.S. Capitol.

Riley June Williams was found guilty of six federal counts, including civil disorder. But the jury deadlocked on two other charges, including “aiding and abetting the theft” of a laptop that was stolen from Pelosi's office suite during the insurrection. The jury also failed to reach a unanimous verdict on whether Williams obstructed an official proceeding.

Williams joined a mob's attack on the Capitol after attending the “Stop the Steal” rally, where then-President Donald Trump addressed thousands of supporters earlier that day. Entering Pelosi’s office, she found a laptop on a table and told another rioter, “Dude, put on gloves,” before someone with a black gloved hand removed the computer, according to prosecutors.

Williams later bragged online that she stole Pelosi’s gavel, laptop and hard drives and that she “gave the electronic devices, or attempted to give them, to unspecified Russian individuals,” prosecutors said in a June 2022 court filing.

“To date, neither the laptop nor the gavel has been recovered,” they added.

A witness described as a former romantic partner of Williams told the FBI that she intended to send the stolen laptop or hard drive to a friend in Russia who planned to sell it to Russia’s foreign intelligence service. But the witness said Williams kept the device or destroyed it when the transfer fell through, according to an FBI agent's affidavit.

Williams, a resident of Harrisburg, Pennsylvania, was arrested less than two weeks after the riot. She was charged with theft of government property, assaulting police and obstructing the joint session of Congress for certifying the Electoral College vote. Williams also faced misdemeanor charges, including disorderly or disruptive conduct.

Williams denied stealing the laptop when the FBI questioned her. She claimed her ex-boyfriend “made up” the allegation, prosecutors said.

Before she left the Capitol, Williams joined other rioters in pushing against police officers trying to clear the building's Rotunda. Police body camera captured the confrontation, as Williams encouraged other rioters to “keep pushing,” and “push, push, push.”

Williams was wearing a shirt bearing the message, “I’m with groyper,” when she entered the Capitol. The term “groyper” refers to followers of “America First” movement leader Nick Fuentes, who has used his online platform to spew antisemitic and white supremacist rhetoric.

Other followers of Fuentes have been charged with Jan. 6-related crimes, including former UCLA student Christian Secor, 24, of Costa Mesa, California. Secor, who was waving an “America First” flag when he entered the Capitol, was sentenced last month to three years and six months in prison.

Williams' online footprint also included material associated with “accelerationism,” a violent ideology that asserts “Western governments are corrupt and unsalvageable, and therefore the best thing a person can do is accelerate their collapse by sowing social chaos and generating political conflict,” prosecutors said.

In December 2020, Williams attended at least two rallies protesting the outcome of the presidential election. Both rallies featured speeches by Fuentes.

“Her admiration of Nick Fuentes, self-identification as a ‘Groyper,’ belief in Accelerationism, and support for violence all circumstantially show the mixed motives behind her actions on January 6: she not only specifically sought to block Congress from certifying the Electoral College vote, but also to undermine and obstruct the government more generally,” prosecutors wrote.

Before her trial, Williams' attorneys questioned the relevance of her political activities and ideology.

“There is no evidence linking her beliefs and actions prior to January 6 with her actions that day,” they wrote. “There is a legitimate risk that jurors will judge Ms. Williams merely for the unpopular and extreme ideologies she has embraced in the past, rather than for the actual crimes with which she is charged.”