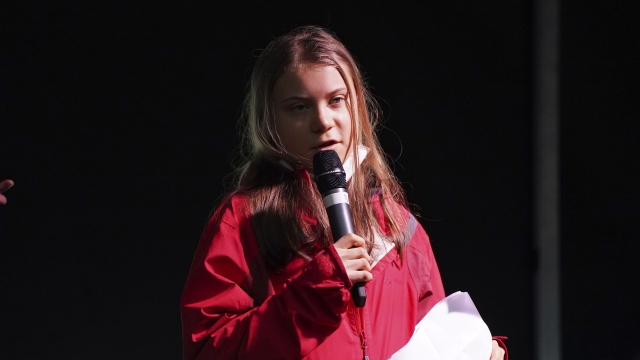 The youngest person to grace the cover as Time's person of the year celebrates her birthday.

"You have stolen my dreams and my childhood with your empty words. We are in the beginning of a mass extinction, and all you can talk about is money and fairy tales of eternal economic growth. How dare you!" Thunberg said at the 2019 U.N. Climate action summit.

It was that impassioned speech she made at age 16 that changed behaviors for many regarding the environment and put a global spotlight on her.

When she started the movement School Strike for Climate the year before, she was alone skipping school to protest outside the Swedish parliament — and it ballooned.

"And if a bunch of school kids were able to get millions of people to go out on the streets. Just imagine what we can do together," Thunberg said.

Around 6 million people protested in one week in September 2019, across 163 countries on 6 continents. Some called it the "Greta effect" but Brazil’s president had choice words, calling her a "brat."

"The people in power have proved that they’re not going to the ones leading the change not without massive public pressure from outside. We have to be that pressure. We are never going back to their normal again. Because the climate crisis is ticking clock that is rapidly approaching the countdown’s end," Thunberg said.

Time has only strengthened Thunberg’s resolve. The four-time Nobel Peace Prize nominee continues to turn up the heat on world leaders to mitigate climate change with her signature direct approach.

"We are still here and we are not going anywhere. Young people all over the world are stepping up and showing that our world leaders messed with the wrong generation," she said.

Thunberg continues her climate strike, this time from all around the world. She recently skipped U.N.’s climate conference in 2022, calling it an opportunity for global leaders to get attention and greenwash the crisis.

Aside from her climate activism, Thunberg is also outspoken about her form of autism, calling it her superpower.