Zelenskyy: Time's Person Of The Year; Courage 'As Contagious As Fear' 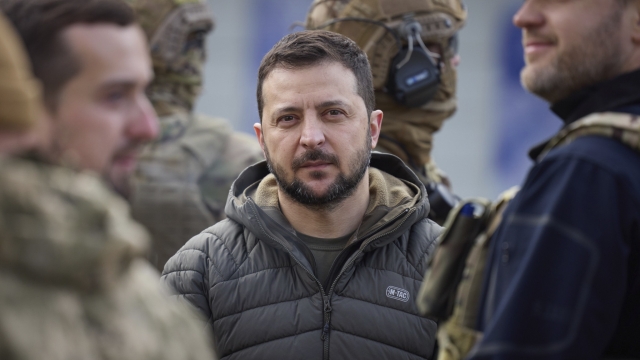 Ukrainian President Volodymyr Zelenskyy was celebrated with two accolades in the same week, one from Time magazine and another from Financial Times.

"The most clear-cut choice in memory" is how the editor-in-chief of Time magazine described the decision to pick Ukrainian President Volodymyr Zelenskyy as the publication's person of the year.

"Whether one looks at this story of Ukraine with a sense of hope or a sense of fear — and the story is, of course, not fully written yet — Zelenskyy has really galvanized the world in a way we haven’t seen in decades," said Edward Felsenthal, the CEO and editor-in-chief of Time magazine.

It's yet another accolade to add to Zelenskyy’s collection: This week alone, he was also named the Financial Times’ person of the year and accepted a human rights award.

The road to recognition has been paved with blood, sweat and tears for Zelenskyy, as he shepherds Ukraine through months of bloody conflict.

A glimpse of those tears was on display in Bucha in April; Zelenskyy made a show of support and solidarity after the bodies of hundreds of civilians were found tortured by Russian troops. But along with the emotion was a display of strength and a promise to fight back.

Lions Rescued From A Ukrainian Zoo Have Found A New Home In The U.S.

Ukraine has made efforts to fly many of its most endangered animals out of the war-torn country, like lions from the Odesa Zoo.

After more months of brutal war, in September, hundreds more bodies were uncovered in a mass forest grave near the recaptured city of Izyum. It was further evidence of ruthless abuse, leading to another front-line visit and a fervent vow from Zelenskyy to ramp up efforts to regain control of lost territory.

In November, another trip was laden with emotion for the leader, but this time, it was of triumph. Zelenskyy’s visit to Kherson was spent celebrating the Russian withdrawal there, but he also mourned the heavy price still being paid by Ukraine’s troops.

"This is the beginning of the end of the war," Zelenskyy said.

Now, as the war in Ukraine continues on, there has been a new show of defiance from President Zelenskyy, addressed military members on the eastern front line where there is fierce fighting.