Lions Rescued From A Ukrainian Zoo Have Found A New Home In The U.S. 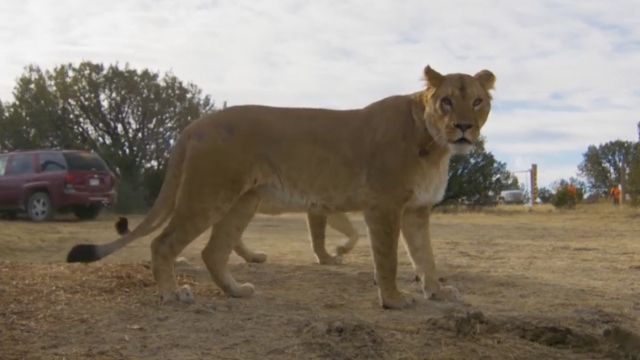 Ukraine has made efforts to fly many of its most endangered animals out of the war-torn country, like lions from the Odesa Zoo.

The punishing attacks Russia unleashed on Ukraine have already forced nearly 8 million people to flee the country. But when the war began, 11 special residents of the port city of Odesa had no way to get out.

As the invasion advanced, 11 lions at the Odesa Zoo, including two cubs, were urgently removed by a team of wildlife rescue groups, but they needed someplace to go. That's when Pat Craig — a continent away — got a call.

"Lots of people took their domestic pets; some people took their farm animals," Craig said. "It's always these ones that end up not getting help because nobody can pick up a lion and just throw him in the car and go somewhere."

Craig has been caring for large carnivores, some once belonging to the infamous "Tiger King" Joe Exotic, for about 40 years. He's the founder and executive director of The Wild Animal Sanctuary.

In Ukraine, the lions were sedated, with their eyes covered in the country's blue and yellow flag, and loaded on a truck bound for Romania 600 miles away. Then months went by, waiting for emergency travel permits to be approved.

"There's a lot of red tape, a lot of bureaucracy, and especially coming into the United States, that can take anywhere from three months to a year," Craig said.

Nearly 6,000 miles from where they started their journey, the lions arrived in a Colorado area run by The Wild Animal Sanctuary where lions, tigers, bears and many other animals have found their forever home.

The adult lions were released into a 65-acre enclosure in southeast Colorado, while the two cubs, Chedr and Tsylia, are living at a sanctuary property near Denver. Since they're only about a year old, they've been paired with a mother figure: a part-lion, part-tiger named Beatrice. In between meals of raw chicken and meeting the neighbors, the trio is learning to bond.

"I think for the most part, they're all curious about each other," said Makeisha Ledbetter, animal care manager at The Wild Animal Sanctuary. "They're interested in her, so when she starts to move around, they start to move around. But they're not showing any signs of aggression. They're not trying to charge after her. They're not growling, and she's not acting like she's concerned about them."

The lions will never go back to Ukraine. Instead, they'll spend their lives roaming a large enclosure at The Wild Animal Sanctuary, alongside 700 other rescued carnivores.

"The deal had to be that they were coming for life," Craig said. "The facility that they had was a lot of concrete steel bars, so just knowing that they would eventually get into a natural habitat was very enticing."

It's not cheap: The lions alone will cost Craig around $100,000 a year for care and food. The nonprofit sanctuary relies on donations and admission fees to offset the cost, but Craig insists it's worth it.

"It's ironic that they're the most pored over when people think of 'I want to go to the zoo. I'm gonna go see the tigers or lions or the bears,' and yet when it comes time to rescue them from really bizarre, weird situations, it's not that nobody wants to, it's just they can't," Craig said. "It is a great rescue for us to see the animals be happy and get in their habitats because the animals and us humans are both happy that they're here, and it worked out."