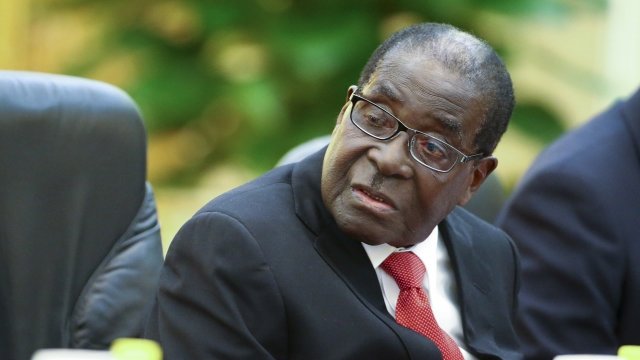 After a wave of criticism, the World Health Organization took back its latest "goodwill ambassador" appointment.

That title was given to Zimbabwe President Robert Mugabe. He's headed Zimbabwe's government since 1980. For years, he's been under international sanctions for human rights violations and eroding the nation's democratic process.

Part of Mugabe's infamy both inside Africa and out stems from his effort to redistribute farmland owned and operated by white Zimbabweans — the descendants of European colonizers. However, Mugabe's effort backfired as those farms — once the nation's economic backbone — saw a dramatic decline that contributed to a food shortage and helped tank Zimbabwe's economy.

In response to Mugabe's appointment, nearly 30 health organizations signed a joint statement saying they were "shocked and deeply concerned to hear of this appointment, given President Mugabe's long track record of human rights violations and undermining the dignity of human beings."

I’m listening. I hear your concerns. Rethinking the approach in light of WHO values. I will issue a statement as soon as possible

Mugabe's political opponents were quick to point out Zimbabwe's health system is in shambles. Mugabe himself, who is in his 90s, travels abroad to receive medical care.

The WHO director general said Mugabe was chosen due to Zimbabwe's prioritizing universal health coverage and health promotion in domestic policy. But he acknowledged the backlash on Twitter, and by Sunday he'd rescinded the appointment.

He says there are likely to be the same problems that caused the country's Supreme Court to annul the first election's results.

Mugabe's appointment would have put focus on noncommunicable diseases, or NCDs, in Africa — diseases that can't be transmitted and that are not caused by infectious agents. According to the WHO, NCDs account for 70 percent of all deaths worldwide.