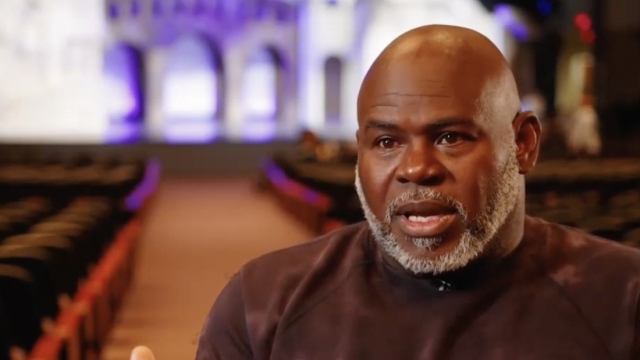 Actor David Mann shares how he found support for his mental health and how he's encouraging others to seek help.

Actor David Mann is known for his humor and comedy on screen, but in real life, he says he was finding fewer things to laugh at.

"Going through the depression was like I was drowning and I couldn't swim my way out, and nobody seen I was drowning," Mann said.

In a candid interview with Scripps News, Mann said he struggled with depression for a while.

He found support from family but admits to hiding his struggles at first.

Experts say that decision to avoid treatment and hide mental stress can come from a societal pressure and stigma.

Your emotions and mood can contribute to your physical and mental health. It can affect depression, anxiety and insomnia.

It's part of the reason therapist Monroe Howard-Shackleford has made it his mission to encourage men, particularly Black men, to seek treatment.

"You're supposed to have all the answers, and when you don't have the answers right, that is unnerving. It's unsettling. It's maddening," Howard-Shackleford said.

According to the CDC, while males make up 49% of the U.S. population, they make up 80% of deaths by suicide.

Howard-Shackleford says stigma is only one of the barriers to getting help. Many also face issues in finding a professional like oneself.

Experts and studies agree that shared experience and background can be important to people seeking treatment. But according to the American Psychological Association, 84% of psychologists in the U.S. are white, 4% are Black and 71% of psychologists overall are women.

Howard-Shackleford says while access remains an issue, the stigma is lessening, especially for Black men, thanks to people like David Mann, radio host Charlamagne tha God, and rapper Jay-Z, who are willing to share their stories.

Mann says he's found a new purpose in life in encouraging others to seek help. He's even worked the message into his stand-up.

"One day I said, 'How am I crying in the middle of a comedy set?'" Mann said. "Because I'm looking at the faces of broken men, broken women, broken people. And I'm seeing, 'Wow, your words matter.'"

SCRIPPS NEWS' AMBER STRONG: As a man, as a Black man, as a Christian, as a human being, why was it so important for you to share your story?

DAVID MANN: I figured this now is something that I can do to help in this space. Black folk. White Folk. People. It's okay to get help, and it's okay that it's not okay. Just don't stay broke. And that's my little thing.

If you need to talk to someone, call the Suicide and Crisis Lifeline by dialing 988 or text "HOME" to the Crisis Text Line at 741741.

Mindfulness Worked As Well For Anxiety As Drug In Study

200 participants were randomly assigned to a mindfulness program or daily use of a generic drug for depression and anxiety over six months.