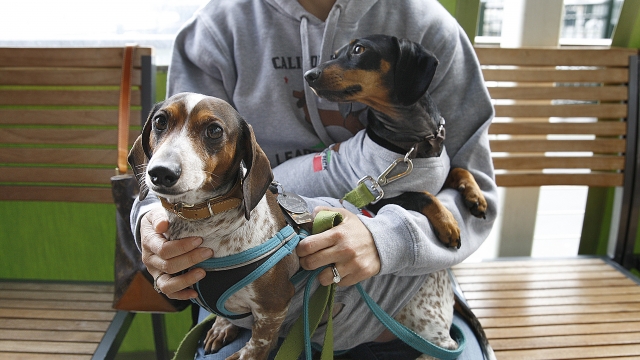 Though humans have tried for thousands of years, modern science has found new ways to communicate with the animal kingdom — with limited success.

New developments in artificial intelligence and technology could help humans communicate with their pets and any other animal species that calls Earth home.

Outside of the field of science, the idea of two-way human-animal communication has existed in pop culture since at least as far back as 1967, when the original "Doctor Dolittle" movie came out.

But the idea is no longer just a far-fetched movie plot; it's nearing reality.

Scientists have uncovered successful methods of understanding animal language, including the complexities of their various sounds and actions together.

The research into talking to animals goes back years, but in 2017, scientists figured out one crucial factor in their AI-based endeavor: Languages, both human and animal, can be visualized as shapes, and these shapes are way easier for AI technologies to decipher and decode.

"You ask the AI to build a shape that represents a language," said Aza Raskin, co-founder and president of Earth Species Project. "You could take English, you could take Japanese, and you could rotate one shape on top of the other, and the word that is "dog" ends up in the same spot in both. In the animal domain, when we want to translate animal communication that you can then translate, say, from behavior to what the animals are saying, from what the animals are saying to another dialect of another animal."

Raskin and the California-based nonprofit Earth Species Project is on a mission to decode animal communication based on the advances in AI combined with the growing understanding of how, why, and when animals make certain sounds and actions. Raskin told Newsy about a recent breakthrough development in AI technology that's brought humans closer than ever to talking to furry friends.

"You can put in three seconds of anyone's voice — my voice, your voice — and the computer will continue to speak in your voice after those three seconds are up, so it'll continue saying what you were saying," Raskin said. "It'll say it with your diction, with your prosody, with your identity, and it'll maintain semantic coherence for five, six, seven, eight seconds. One of the realizations then is that that means that the next 12, 36, 48 months, we will be able to do this with animal communication."

That means humans might be able to directly ask their dogs why it's barking or why a cat is meowing, and the pets could theoretically understand the human's words, beyond just the basics.

It's because scientists are going to use these animal acoustics and combine that with what's already know about a species' body language, behavior, and even things like travel patterns to help create a kind of Google Translate for animals.

But as humans approach a potential breakthrough in cross-species communication, it's also important to keep in mind that how and why humans use this technology will have larger social and ethical implications and consequences — not just in daily life, but for the survival of the species humans may end up being able to talk to. Raskin shared an example of this:

"For whatever reason, Australian humpbacks are like the pop singers, and because humpbacks can sing off in across-ocean basins and they migrate halfway across the world, a song off the coast of Australia can go viral and, within a couple of seasons, can be sung by much of the world population," Raskin said. "If we just create a synthetic whale that's singing, we may have invented the CRISPR of culture and whale and dolphin culture that extends back 34 million years. That's not something that we should just mess up or pollute or create the viral meme of."