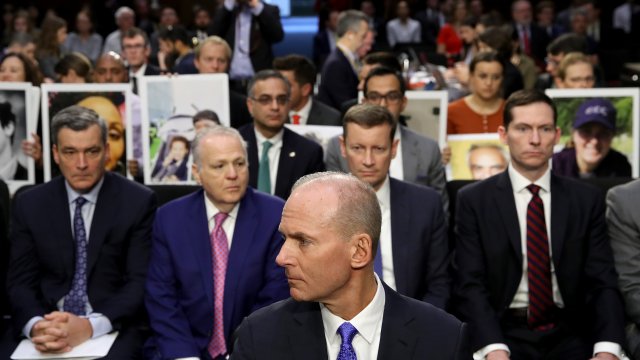 Dennis Muilenburg's testimony comes amid Boeing's most gripping crisis in decades. He admitted missteps, but defended the response to two crashes.

Boeing's CEO took questions from sometimes-angry lawmakers Tuesday, in the first of two hearings on Capitol Hill about his company's grounded 737 Max.

Muilenburg started his testimony with an apology to the families of the victims on two deadly Max flights. Some of those family members sat just a couple rows behind him, carrying large pictures of the loved ones they lost.

“I think about you and your loved ones every day," Muilenburg said. "And I know the entire Boeing team does as well.”

Lawyer Suing Over 737 MAX Crash: Never Seen Anything 'Quite Like This'

Brian Kabateck represents 12 Indonesian families suing Boeing over the Lion Air flight 610 crash. He says the FAA needs a check of its own.

But his emotional opening lines didn't disarm the Senators sitting in front of him, eager for answers on Muilenburg's missteps in overseeing the safe implementation of Boeing's once-promising new jet.

Boeing implemented a new automation system in the 737 Max intended to make the redesigned jet fly like previous iterations of the 737. Instead, it's blamed, in large part, for the crashes of Lion Air flight 610 and Ethiopian Airlines flight 302. The system, MCAS, erroneously and aggressively pitched the nose of both flights toward the ground, without pilot input.

In an hours-long question-and-answer session, Senators slammed Muilenburg with suggestions of failed leadership, coverup, and disregard for the safety of the passengers who fly Boeing jets.

Muilenburg laid out his company's plans to fix the MCAS, and detailed structural changes at the company to streamline reporting of safety concerns.

Boeing told pilots to follow a common procedure to recover from an MCAS failure. But in the case of Ethiopian Airlines flight 302, it wasn't enough.

Senators also peppered Muilenburg, who recently lost his second title as Chairman of Boeing's board, with questions about his company's initial response to the second Max crash in March.

“Boeing came to my office shortly after these crashes and said they were the result of pilot error,” Sen. Richard Blumenthal said.

In a video statement shortly after Ethiopian Airlines flight 302 crashed, Muilenburg said, "The history of our industry shows most accidents are caused by a chain of events. This again is the case here."

"What your average line pilot across the globe heard was very standard fare for some stakeholders," Dennis Tajer, the spokesperson for American Airlines pilots' union, and a 737 pilot who flew the Max before its grounding, told Newsy. "In our world, they were dog whistling that this was — if the pilots had only acted and performed with perfection, this wouldn't have happened. It's just absurd."

"We have not blamed the pilots," Muilenburg said Tuesday. "That is not our company position, and it never will be.”

Muilenburg's testimony came after the public release of documents showing direct messages between Boeing test pilots, worried about the effect of MCAS. An email from during the certification process shows the Chief Technical Pilot on the 737 Max at the time wanted mention of the MCAS taken out of training and reference material for the plane.