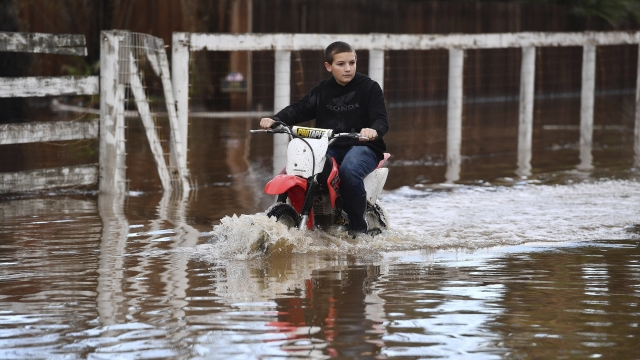 As the rain keeps falling in California, crews are struggling to keep California residents above water.

"We're out there pumping the water, but it's difficult to get ahead of the game because there's so much water still coming down," said Jeff Weiss, spokesman for Caltrans.

In Sonoma County, one of the hardest hit regions, volunteers are handing out food and cleaning supplies. Residents there say they have lost days of work, dealing with the impact of the storms.

"We have heard from many, many dozens of people who are extremely concerned about being able to pay their rent or pay their electric bill as a result of the financial impacts of the storms," said Lynda Hopkins, Sonoma County supervisor.

At least 19 people have died in the storms, with California Gov. Gavin Newsom saying the weather has taken more lives in the last two years than wildfires have.

Heavy rain that caused flooding, sinkholes and closed roads is starting back again as crews still try to repair damage from the week's earlier storms.

Among the dangers are flooded roadways in areas like San Diego and completely washed away roads in the valley near Ojai.

"Unless you do a major project, bring in a lot of dirt of elevate a bridge, we're still going to get a lot of flooding with these big storms," Weiss said.

The Hurricane Hunters released a video of their plane up in the "atmospheric river," collecting data for forecasters on the ground.

The National Weather Service says flooding could continue into Tuesday, and while more light rain is coming mid-week, the Golden State should finally start drying out Thursday.

In Montecito, where mudslides killed 23 in 2018, a new netting system prevented more of the same. Community members are hoping it proves the durability of what could be a solution for more of the state.

"We're looking at this type of thing occurring more frequently now," said Pat McElroy, executive director of The Project For Resilient Communities. "I was here in 2018, and I was still working. It was a devastating experience. I'm not over it yet, but to wake up the other day and see no injuries and no fatalities, I just can't tell you how impressed I am."

Tens of thousands of people remained without power, and some schools closed for the day.