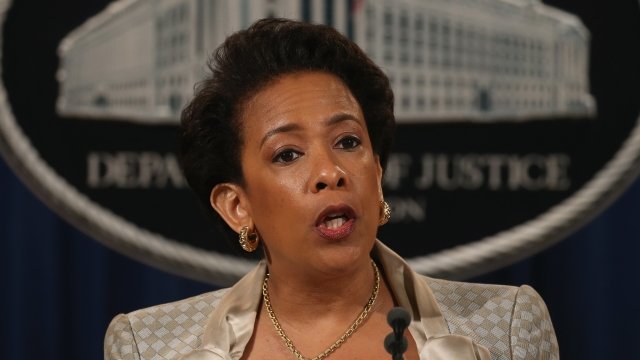 President Trump said Loretta Lynch granted a visa to the Russian lawyer who met with his son. The Department of Homeland Security says that's untrue.

The White House has scrambled to defend Donald Trump Jr. for meeting with a Russian lawyer who promised him incriminating info on Hillary Clinton.

On Thursday, President Donald Trump deflected some of the blame to former Attorney General Loretta Lynch.

A 5th Person May Have Been At Trump Jr.'s Meeting With Russian Lawyer

NBC was first to report that a Russian-American lobbyist attended the June 2016 meeting at Trump Tower.

“Somebody said that her visa or her passport to come into the country was approved by Attorney General Lynch. Now, maybe that's wrong. I just heard that a little while ago, but a little surprised to hear that," Trump said in Paris.

But it appears that whoever said that is incorrect.

The Department of Homeland Security told BuzzFeed it allowed Natalia Veselnitskaya, the lawyer in the meeting, to enter the U.S. so she could represent a Russian investment firm in a money laundering case in 2015. Her visa had originally been denied.

A spokesperson for Lynch issued a statement saying she "does not have any personal knowledge of Ms. Veselnitskaya's travel.” And she wouldn't have been the one to authorize the visa anyway.

The Department of Justice did reportedly ask for Veselnitskaya to be cleared, but the request came from the Manhattan U.S. Attorney's office, not from the DOJ or Lynch.

The DHS statement also said Veselnitskaya's visa from 2015 expired, so she used a standard visitor visa issued by the State Department to travel to the U.S. for her meeting with Donald Trump Jr.

Regardless of which department approved her visas, there are a lot of questions for Trump Jr. about why he would agree to a meeting to get potentially incriminating evidence from a hostile foreign country.

Members of several congressional committees have said they want him to testify about the meeting. Trump Jr. told Sean Hannity he is willing to testify under oath.