A 5th Person May Have Been At Trump Jr.'s Meeting With Russian Lawyer 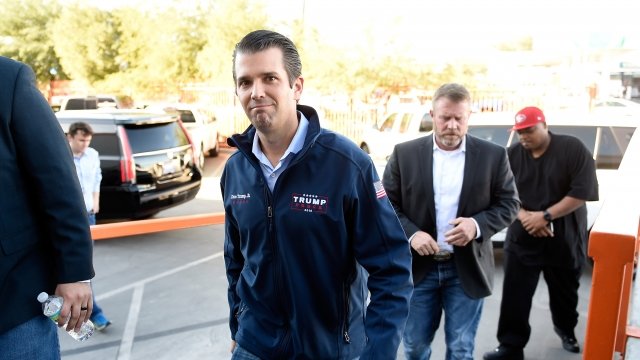 NBC was first to report that a Russian-American lobbyist attended the June 2016 meeting at Trump Tower.

A fifth person was reportedly in the room when Donald Trump Jr. met with a Russian lawyer in June 2016.

NBC was the first to report a Russian-American lobbyist was at the meeting. The outlet said the lobbyist was suspected of having ties to Russian intelligence agencies.

Trump Jr. confirmed to The New York Times he was at that meeting and was promised information that could potentially hurt then-presidential candidate Hillary Clinton. Also there, were his brother-in-law Jared Kushner and his father's then-campaign manager Paul Manafort.

A man named Rinat Akhmetshin told the Associated Press he's the lobbyist and confirmed he was at the meeting.

Trump Jr. released the email thread regarding the meeting earlier this week. It shows the president's oldest son was going to meet with an individual described as "the Russian government attorney," but there's no mention of a lobbyist or fifth person who'd also be there.

Although, the lawyer, who denied being connected to the Kremlin, did tell NBC she was accompanied by a man. She didn't give any other details.

On Thursday, President Donald Trump defended his son during a press conference in France.

"I think from a practical standpoint, most people would have taken that meeting. It's called opposition research or even research into your opponent," Trump said.