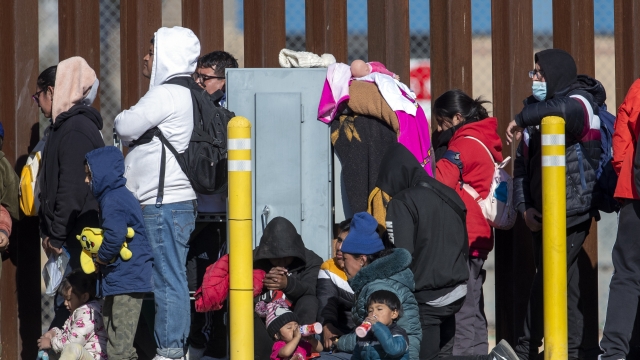 Fewer refugees are crossing the Rio Grande into El Paso overall. But authorities believe there are thousands yet to enter the U.S. because they are awaiting a Supreme Court decision on whether or when to lift pandemic-era immigration restrictions, otherwise known as Title 42. Those who are gaining entry are subject to an exemption under humanitarian parole.

Melissa Gonzales from Ecuador told Newsy she’s requesting asylum because her home country is dangerous, insecure and has a lack of jobs.

"The economy is bad, no work," Gonzales said.

U.S. Border Patrol gave Newsy an inside look at a spot on the fence line where migrants are requesting asylum after having journeyed through Mexico then waded through the river from Ciudad Juarez. Many in the group included Cubans, Venezuelans and Ecuadorians.

Lately their options for entry have been limited not by the federal government, but by hundreds of Texas National Guard soldiers and Department of Public Safety troopers.

"We are doing an exercise with the border patrol of stopping the migrant flow where this wall ends," said Sgt. Elliot Torres with the Texas Department of Public Safety.

Under the restrictions, officials have expelled asylum-seekers inside the United States 2.5 million times.

On Tuesday national soldiers installed concertina wire along the embankment, effectively blocking a path migrants once took to get to border patrol agents. The obstacle rerouted groups to find another space to declare asylum.

When the border patrol has room, periodically the gate opens at the bollard line. That means they have space to process migrants who are requesting asylum. Newsy saw this happen every 15 minutes or so.

"The group from yesterday got pushed all the way over here so now border patrol gets to do their job effectively," Torres said.

After being processed, the federal government releases the refugees in El Paso. Their next step is trying to find shelter and warmth.

A Nicaraguan refugee seeking asylum named Suheyling Listen Jiron told Newsy she’s worried about the impending cold weather. Freezing temperatures are expected in El Paso over the weekend. She says some refugees have had to sleep out in the cold overnight.

"These people that are coming have fled their homes," said Rev. Mark Seitz, Bishop of the Catholic Diocese of El Paso. "They're not just leaving so that they can get a few thousand more dollars a year in a job or buy a nicer car. They're leaving because their lives are usually threatened or because their children are actually malnourished. They're leaving for very serious reasons. They love their home, they love their home country. This is a situation of forced migration. And we're not even asking those questions right now. With Title 42, we don't ask, 'Why did you come?' We simply say, 'Turn around and go back somewhere.' And we're sending them into some of the more unstable and dangerous places in the world."

"You know, the feeling that Jesus went around with Mary and Joseph during this time, it brought us back. We should be helping others because we have so much to give," said Julie Huizar, an El Paso resident.

"I can only imagine what they could be going through. We can give them a helping hand," said Lucy Abeyte, an El Paso resident.